Neena Gupta was a part of the 1991 film 'Vasthuhara' which featured Mohanlal in the lead. The film is also a recipient of the National Award 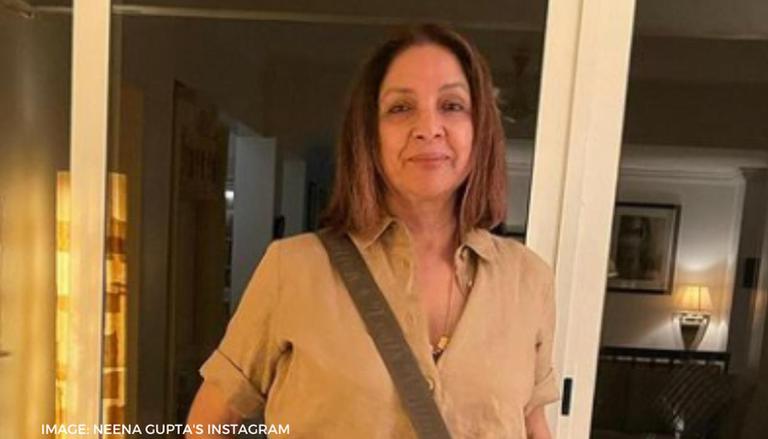 
G Aravindan's 1991 film Vasthuhara is a Malayalam social drama based on the short story by CV Sriram of the same name. The film was well-received by the audience and also won several accolades including the National Award for Best Picture in Malayalam that year and the State Award for Best Picture, Director and Story. The film starred Mohanlal, Shobana, Neelanjana Mitra, and Neena Gupta in key roles. On Thursday, June 3, Neena Gupta took to her social media page to celebrate the 30th anniversary of Vasthuhara.

Vasthuhara marked Neena Gupta's debut in Malayalam cinema. Taking to her Instagram stories, Neena Gupta reposted a collage of a few stills from the movie. In the collage shared, there was one solo shot of a young Neena Gupta from the movie while one picture showed her and Mohanlal walking side by side. Take a look at the picture below. 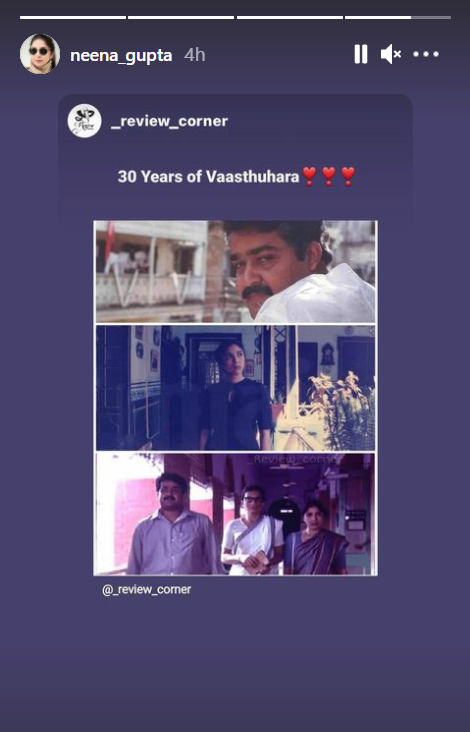 In the movie, Mohanlal plays the role of Venu a government official in Kolkata who is responsible for relocating refugees fleeing to Ranaghat in Bengal to the Andaman and Nicobar Islands. Neena Gupta plays the role of Damayanti, daughter of a refugee who quit her studies to be a revolutionary who is now on parole. The movie gives an insight into the life of refugees who after being displaced from their homes resort to doing small-time jobs, working as bonded labourers, and while some simply give up or keep waiting to go back to their land some refugees become communist rebels and end up behind bars for the rest of their lives.

READ | Neena Gupta shares a picture of her 'working from home' companions; take a look

A look at Neena Gupta's latest movies and upcoming projects

The actor was last seen in the Netflix movie Sardar Ka Grandson in which she played the role of Sardar. The movie also starred Arjun Kapoor, John Abraham and Aditi Rao Hydari. She was also a part of Parineeti Chopra and Arjun Kapoor's Sandeep Aur Pinky Faraar in which she played the role of a Punjabi woman living on the Nepal border who rents her home to Parineeti and Arjun's characters.

The actor will next be seen in sports drama 83, Dial 100 and Gwalior. She also has the second season of her show with daughter Masaba titled Masaba Masaba coming up on Netflix later this year and the second season of Amazon Prime Video's Panchayat. Apart from acting, the Badhaai Ho actor has also turned into an author and is gearing up for the release of her autobiography Sach Kahun Toh.

READ | Neena Gupta and Masaba's most stylish moments together, here's a quick peek

READ | Neena Gupta goes for a run in the misty mountains of Mukteshwar; see video