We have some exciting film lineups starting from 'KGF' to 'Gadar' that are back with sequels and will hit the screens this year. 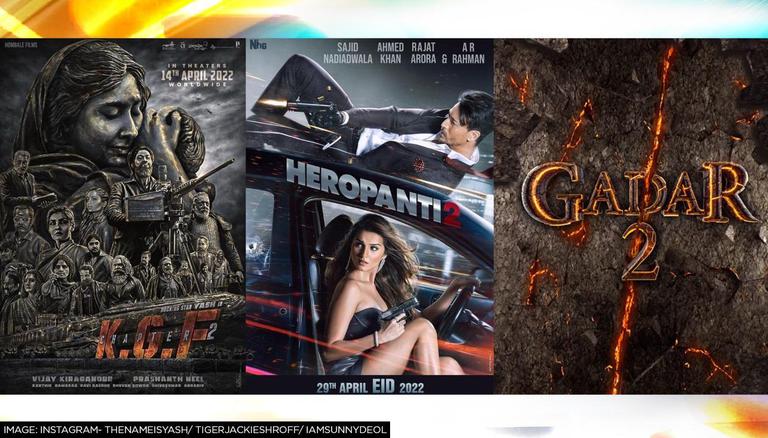 
We have stepped in 2022, and it is good news for the film lovers as they will get to watch some exciting lineups of the films slated to hit the screens this year. While 2021 witnessed many big releases, few releases were on halt; however, 2022 will bring along a bag full of surprises with amazing sequel films that are likely to be a crowd puller. So, check out the list of some of the big sequel films releasing this year.

KGF Chapter 2, one of the most anticipated films of the year written and directed by Prashanth Neel, and produced by Vijay Kiragandur under the banner Hombale Films, might hit the screens next year in April. The Yash starer film KGF became a national sensation after the success of its first part and since then people are eagerly waiting for its second instalment.

After the success of Ek Villain, it has managed to create a strong fan base and is back with its second instalment Ek Villain Returns starring John Abraham, Arjun Kapoor, Disha Patani and Tara Sutaria in lead roles. The film is scheduled to hit the floors on July 8, 2022.

The song Udja Kale Kawan will be the all-time favourite song of the Gadar fans and recently, Taran Adarsh taking to his Twitter handle confirmed the comeback of the popular action-drama film. In the sequel of the most awaited film Sunny Deol, Ameesha Patel and Utkarsh Sharma will appear in reprised roles.

Heropanti 2 is a sequel to the 2014 film Heropanti starring Kriti Sanon and Tiger Shroff in lead roles. The film is directed by Ahmed Khan, written by Rajat Arora and produced by Sajid Nadiadwala. In the second instalment, we will get to see tiger making a comeback with his cool action moves. The film also stars Nawazuddin Siddiqui and Tara Sutaria in pivotal roles.

Featuring Rajkummar Rao and Bhumi Pednekar as the lead actors, this forthcoming family drama is helmed by Harshavardhan Kulkarni. The film is scheduled to hit the theatres this year on February 4th and it is a sequel to the popular film Badhaai Ho.

Bhool Bhulaiyaa 2 stars Kartik Aaryan, Tabu and Kiara Advani in lead roles and it is the sequel of the popular 2007 horror-comedy Bhool Bhulaiyaa.The film is helmed by film by Anees Bazmee and produced by Bhushan Kumar.

Hera Pheri 3 stars Suniel Shetty, Paresh Rawal, Neha Sharma, Akshay Kumar and John Abraham in prominent roles. It is a comedy-drama film directed by Neeraj Vora and as the last two venture's of the film was a big success, so fans have high expectations from this one as well.