Actor Kangana Ranaut and singer Adnan Sami were conferred with Padma Shri on Monday during a special ceremony in the National Capital at Rashtrapati Bhavan. 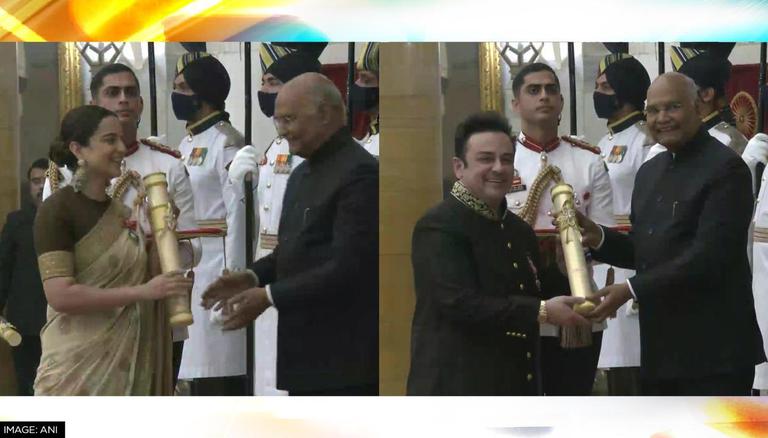 
On Monday, actor Kangana Ranaut and singer Adnan Sami were conferred with Padma Shri during a special ceremony in the National Capital at Rashtrapati Bhavan. They were honoured with the awards by President Ram Nath Kovind. Pictures from the ceremony have started surfacing on the Internet where the Manikarnika actor is seen wearing a green-golden saree while on the other hand, the singer can be seen looking dapper in a black sherwani with golden embroidery around the neck.

Apart from the two stars from the film fraternity, the other recipients included TV czarina Ekta Kapoor and late singer SP Balasubramaniam. Earlier, visuals of the recipients seated at the hall before the ceremony flooded on social media. Television and theatre actor Sarita Joshi was also honoured with Padma Shri by President Ram Nath Kovind. As Kangana Ranaut received the award, her sister Rangoli Ranaut, who was present at the venue, was reportedly seen applauding and cheering for the star.

Kangana meanwhile was earlier conferred with the National Film Award for her two prominent films — Manikarnika-The Queen of Jhansi (2019) and Panga (2020). “We all grow up with a deep desire to be worthy of our parent's love, care, and sacrifices…After all the troubles I give my mummy papa such days seem to make up for all those mischiefs...Thank you for being my mummy papa I wouldn’t want it any other way …[sic],” she wrote alongside the pictures while dedicating the award to her parents post the ceremony.

During her recent interaction with Hindustan Times, the actor had said that the Padma Shri is the most special honour for her. She then said that she has always been honoured as an artist but this time, she has also been recognised as a citizen and for her awareness towards the country. The National Award was special for her because she knew that the industry always points fingers at her and now she has proved her mettle.