Bollywood actor Pankaj Tripathi revealed that his daughter was a big fan of the Korean boyband BTS, his wife also watched K-dramas. Read On. 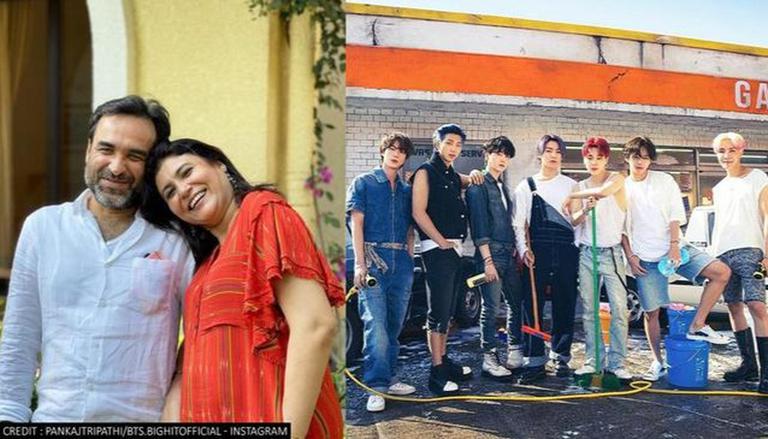 
South Korean boyband BTS has garnered fans from all over the globe. Several international and Indian celebrities have shared that they were a part of BTS' ARMY. Bollywood actor Pankaj Tripathi recently revealed that his daughter is a K-pop and K-drama fan and she is also a part of BTS' ARMY. The Mirzapur actor also shared that his wife also enjoyed watching K-drama shows.

As per Hindustan Times, the actor told a leading daily that currently his daughter was only into BTS and K-drama and she does not watch Indian series or movies. Tripathi also added that his wife also was a K-drama fan and he also watched some Korean shows with his wife. The actor jokingly added that his wife and daughter wanted to go to Korea and meet these singers and actors while he did not understand why they were famous.

Pankaj Tripathi on his upcoming projects

Pankaj Tripathi's breakthrough in mainstream cinema came from Gangs of Wasseypur. Tripathi received widespread acclaim for his portrayal of the main antagonist Sultan Qureshi. The movie is centred on the coal mafia of Dhanbad, and the underlying power struggles, politics and vengeance between three crime families. The Mimi actor further gained acclaim for his role as mafia don Kaleen Bhaiya in Amazon Prime Original's crime thriller Mirzapur. The performances of the cast members, particularly Tripathi's, received a rave response and the show eventually became the most popular web series of India, followed by Sacred Games. The second season of Mirzapur was released on October 23, 2020, and a third season is currently underway.

Tripathi will next be seen in the biographical sports film '83 and will revolve around the Indian cricket team that had won the 1983 World Cup. The movie was earlier scheduled to release on June 4, 2021, but was postponed indefinitely due to the rise in COVID cases. Pankaj will also be seen in the action-comedy film Bachchan Pandey alongside Akshay Kumar, Kriti Sanon and  Jacqueline Fernandez in lead roles. The film will theatrically release on January 26, 2022 coinciding with India's Republic Day.

WE RECOMMEND
BTS' Jimin was told ‘it’s easier to dream’, faced hurdles while becoming K-Pop idol
BTS ARMY celebrates 'VMin day' in the honour of the 95-liners V and Jimin's birth years
Pankaj Tripathi's Birthday: from 'Mirzapur' to 'Ludo', look at his best performances
Watch BTS exude casual aura in the preview pics of their reality show ‘In The Soop'
BTS Jungkook's birthday billboard removed in Pakistan for promoting 'homosexuality'