Priyanka Chopra Backed To The Hilt After Pakistan Runs To UN

Priyanka Chopra recently made headlines after her controversial statement on the existing India-Pakistan relationship. The actress who is actively been spotted indulging in a lot of work being the UN Goodwill Ambassador for Peace. However, the Pakistan government has now issued a letter to UN demanding Priyanka Chopra's ouster from the position over her statements on the issue. The Pak government has stated that Priyanka's stand is completely opposite to what should be of a UN Ambassador of Goodwill for Peace.

READ: Priyanka Chopra Unconcerned With Nick Jonas Being Trolled For His 'vacation Body'

Citing Priyanka Chopra's “jingoism and support for violations by the Modi government of international conventions and UNSC resolutions on Kashmir,” Pak Federal Minister, Shireen M. Mazari urged UNICEF to immediately remove the actor from her position as UN Goodwill Ambassador for Peace. The human rights minister also shared a copy of the letter on Twitter on Wednesday.

The letter reads, “I wish to draw your attention to the issue of Ms. Priyanka Chopra whom you have appointed as a UN Goodwill Ambassador for Peace. The recent crisis in Indian Occupied Kashmir (IOK) has been the result of the Modi government's violation of all international conventions that it is a signatory to, along with UNSC resolutions as well as conducting a campaign of ethnic cleansing of Kashmiri Muslims in IOK. The Modi government is also denying 4 m Indian Muslims of their citizenship in Assam creating "detention centers" akin to Nazi concentration camps".

Read the full letter below: 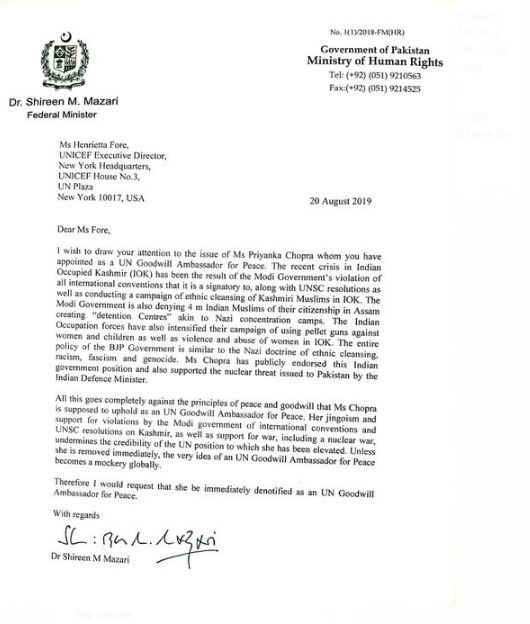 However, the Pak government's petition to remove Priyanka Chopra as the Goodwill Ambassador of Peace did not sit well with fans and netizens, who backed the actress over her statements. Read some reactions below-

Meltdown in Pakistan is complete. After Pakistan failed to get any positive response from @UN on #Kashmir, @ShireenMazari1 wants @priyankachopra removed as @UN Goodwill ambassador. (That's clearly setting the bar high @ImranKhanPTI Govt.) What next? Remove a Sarpanch or RWA prez? pic.twitter.com/MHw4RfJu0X

After facing failure at every corner and finding no friends, Islamabad asks its Truck to go after @PriyankaChopra. https://t.co/EI3n70UtaY

Paxtan is so obsessed with India, they are now attacking our celebs for being loyal to their nation. More power to you @priyankachopra.

Priyanka Chopra was criticised for reacting poorly for being called out over her pro-war tweet by an indignant Pakistani journalist Ayesha Malik. She went on to call Priyanka a 'hypocrite' during a Beauty Con panel talk in Los Angeles, for tweeting in favour of a war between Pakistan and India during escalating tensions earlier this year.

“I hear you. Whenever you’re done venting. Got it? Done? OK, cool,” Chopra had replied condescendingly, going on to add, "Girl, don't yell, we're all here for love. You're embarrassing yourself.”