Bollywood actress Priyanka Chopra who is currently in Ahmedabad for 'The Sky Is Pink' promotions was recently spotted enjoying a pate full of local cuisines.

Bollywood actress Priyanka Chopra who is all set to make a remarkable comeback in the Indian film industry with 'The Sky Is Pink' is currently busy promoting the upcoming venture. The actress who is in Ahmedabad at the moment was spotted enjoying a pate full of local cuisines. Priyanka Chopra took to her Instagram story and shared a picture of herself joyously looking at the Gujarati thali and captioned it saying, "When in Ahmedabad" 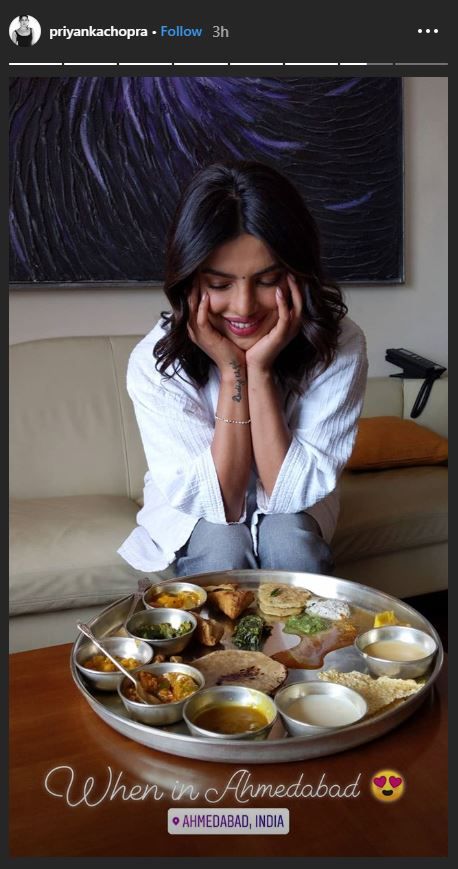 READ | Shonali Bose On The Sky Is Pink's TIFF Premiere: It Was Very Special

Priyanka Chopra was seen leaving for the Gujarat capital earlier on the day. She was spotted at the Mumbai airport, where she stopped, greeted the paparazzi, and bid them goodbye.

Priyanka Chopra is reportedly accompanied by her co-stars Farhan Akhtar and Rohit Saraf. In fact, she shared a picture with Rohit on her Instagram story and captioned it saying, "Moose & Giraffe".

READ | Rohit Saraf: Faced Many Rejections But Happy To Have Reached This Far 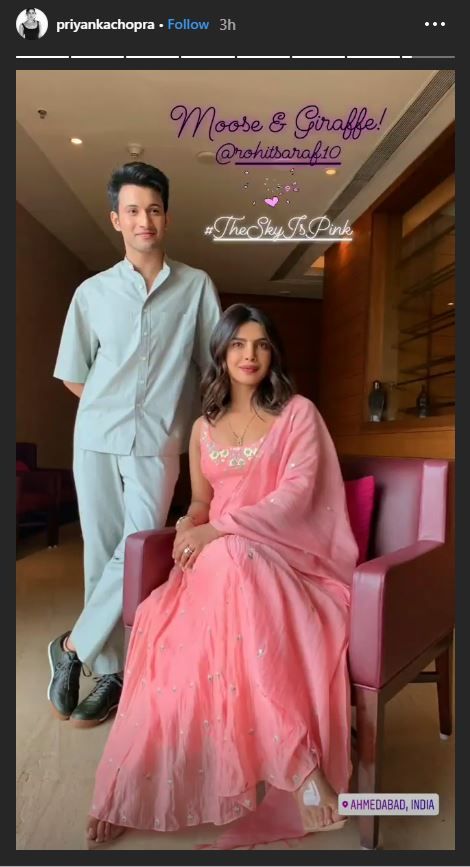 The Sky Is Pink

Meanwhile, directed by Shonali Bose, Priyanka Chopra's 'The Sky Is Pink' is a love story based on motivational speaker Aisha Chaudhary's parents, played by Priyanka and Farhan Akhtar. 'Dangal' actress Zaira Wasim, who recently quit acting, is essaying the role of Aisha in the film. Rohit Saraf plays their son in the film.

'The Sky Is Pink' narrates an incredible love saga spanning over 25 years, which is narrated through the lens of their teenage daughter - Aisha (Zaira Wasim). Aisha became a motivational speaker after being diagnosed with pulmonary fibrosis at the age of 13. The upcoming venture premiered at the Toronto International Film Festival on September 13 and was widely appreciated by the audience and critics. The initial reviews of 'The Sky Is Pink' describe it as an emotional rollercoaster packed with heart-touching moments.