R Madhavan Lauds Sonu Sood For His Humanitarian Work, Says 'such An Inspiration You Are' 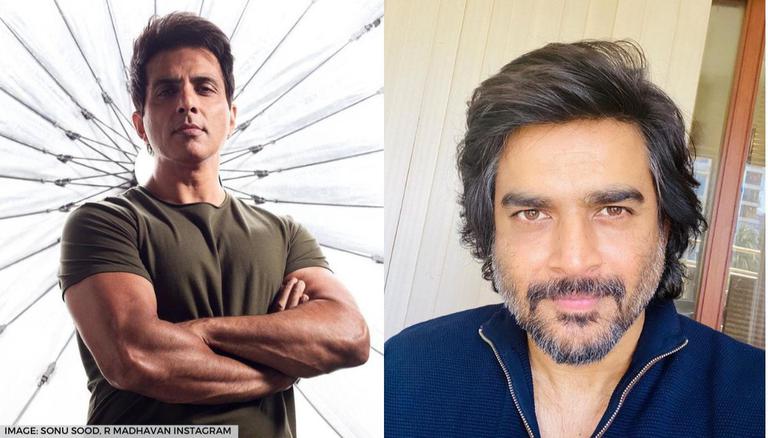 
Actor R Madhavan took to Twitter on Wednesday, May 05, 2021, to laud actor and philanthropist Sonu Sood for helping 22 COVID-19 patients. Taking to his Twitter handle, R Madhavan shared an article that wrote about Sonu Sood’s humanitarian work. Along with the article, he wrote, “Sonu Sood, Team Save Lives Of 22 Covid Patients At Bengaluru Hospital @SonuSood. God bless you brother. Such an inspiration you are”. Take a look at the tweet below. 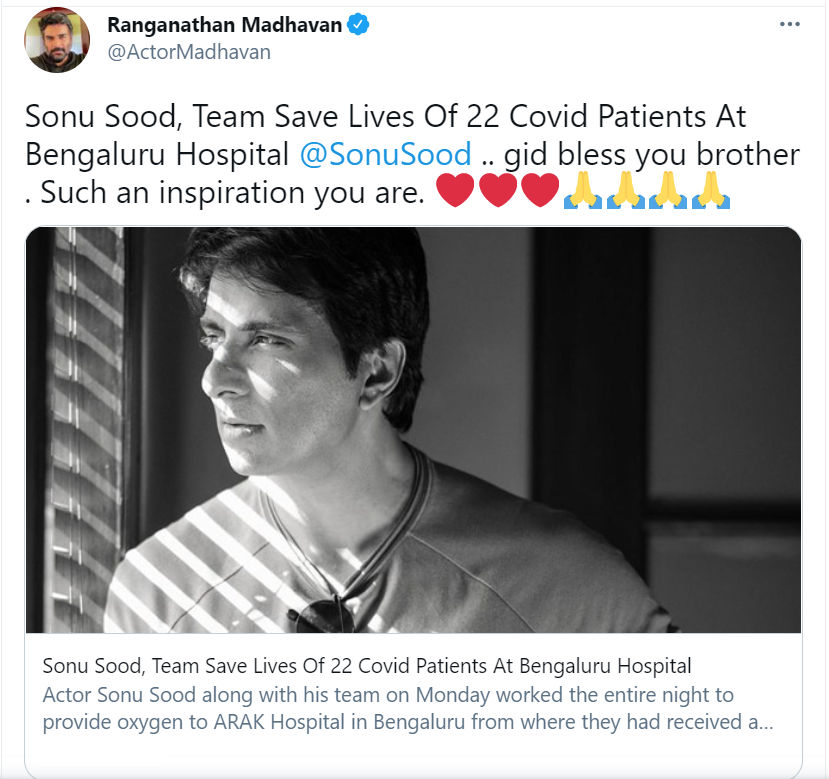 The actor and his team recently worked all night to provide oxygen to ARAK Hospital in Bengaluru. According to the actor, they could save the lives of at least 20-22 people who were in danger due to the alleged lack of oxygen cylinders. On May 4, a member of Sonu Sood's charity foundation received an emergency call from MR Satyanarayan, the inspector of Yelahanka Old Town, regarding a situation at ARAK Hospital, which had already claimed the lives of two patients due to a lack of oxygen supply.

READ | Sonu Sood stands in solidarity with people who lost loved ones: 'You didn't fail, we did'

The team responded quickly to the call and went into action, arranging cylinders for the patients. They contacted all of their contacts and informed them of the critical situation. Within a few hours, the actor's team had arranged for 15 more oxygen cylinders. CPI Satyanarayan also lent his support to the actor. He and the cops handled the situation nicely. At one point, a patient needed to be transferred and there was no ambulance driver available, so the police took responsibility and drove the patient to the hospital.

So proud of my heroes who worked the whole night to provide Oxygen Cylinders to the patients at the ARAK hospital in Bangalore and saved 20 lives.All thanks to @hashmath_raza, @digitalraaghav, @meghachowdhary4, @rakshasom, @radhika28336907, @niddhi_buch & @k.p.sathyanarayana sir

Meanwhile, the actor had previously reached out to a critically ill patient in Jhansi and arranged for him to be airlifted to a hospital in Hyderabad. Doctors in Jhansi had given up on further treatment for the patient Kailash Agarwal and advised his family to look for a bigger hospital. The family tried several times and even approached a local MLA, but they were unable to find assistance. After running errands, they attempted to contact the actor for assistance.

R Madhavan Urges To 'spare A Thought For Kids'

R Madhavan, on the other hand, took to Twitter and penned a note urging everyone to think about young children at home and make them feel safe and comfortable. He also emphasised the importance of explaining the ongoing pandemic situation to children so that they can fight back and emerge stronger than before. Madhavan wrote that in the midst of the disease's chaos, children are the ones who are suffering the most and need to be assured of their safety.

In all This chaos, uncertainty, and stress please spare a thought for the young kids at home.Their world has become frightening and they have are being mostly neglected.Explain to them what is happening and make sure that they feel comforted and secure what we fight this battle.