Actor Ram Charan recently took to Twitter and revealed his first look poster from the upcoming Telegu film Acharya while announcing the resumption of the shoot. 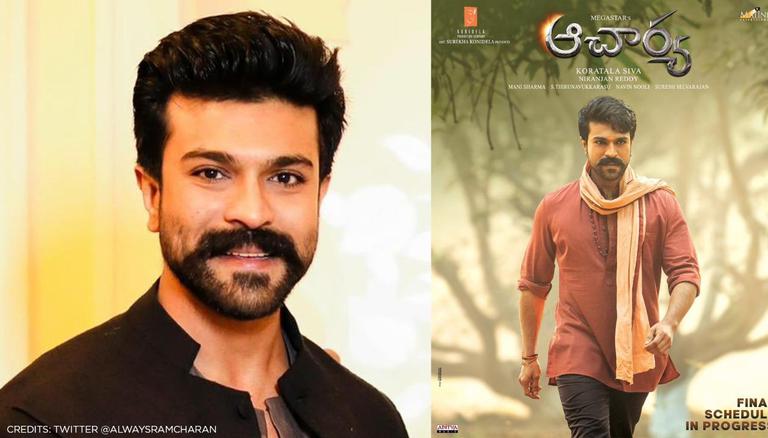 
Actor Ram Charan recently took to Twitter and revealed his first look poster from the upcoming Telegu film Acharya while announcing shoot resumption. Ram Charam, who joined the cast, is playing the role of a student leader named Siddha while his father Chiranjeevi is playing the titular character in the film. The movie, featuring Megastar Chiranjeevi in the title role, is directed by Koratala Siva. ‘Acharya’ is now in the final shooting schedule and soon a date will be announced by the makers for its theatrical release.

The 36-year-old actor informed about the re-commencement of the shoot in a social media post. “Shoot resumes for #Acharya!” Charan wrote alongside his character poster from the film. According to various media reports, veteran actor Chiranjeevi resumed filming for Acharya three days ago. According to The New Minute, 90% of the shoot was completed before the second wave of the coronavirus pandemic. The film, also stars Kajal Aggarwal, Sonu Sood, and Pooja Hegde in pivotal roles. Acharya was scheduled to hit the screens on May 13, but the makers had to postpone the release due to the COVID-19 outbreak and theatre shutdown across the country.

The story of the film reportedly revolves around a middle-aged Naxalite-turned-social reformer who launches a fight against the Endowments Department over misappropriation and embezzlement of temple funds and donations. Presented by Surekha Konidela, the film is bankrolled by Charan and Niranjan Reddy under their Konidela Production Company and Matinee Entertainment respectively.

Meanwhile, on the work front, apart from Acharya, Ram Charan is also shooting for his forthcoming magnum opus SS Rajamouli’s RRR, which stars him, Jr NTR, Alia Bhatt, Olivia Morris in the lead roles. In the film, Ram Charan will be seen essaying the role of Alluri Seetharama Raju while Jr NTR will be seen as Komaram Bheem. The movie is said to be a fictional tale set in the backdrop of the pre-independence era.

READ | 'RRR': Alia Bhatt and Ram Charan to flaunt their chemistry through a lavishly shot song?