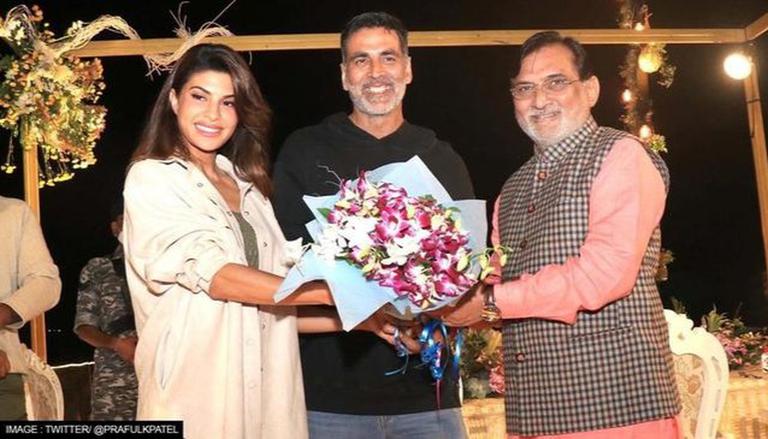 
Akshay Kumar and Jacqueline Fernandez are currently busy shooting for their upcoming film Ram Setu. The team recently wrapped up their Ooty schedule and is now filming in Daman. Dadra and Nagar Haveli, Daman-Diu and Lakshadweep's administrator Praful Patel recently met the stars and shared a few pictures with them on Twitter. Apart from Akshay and Jacqueline, the film will also feature Nushrratt Bharuccha in a prominent role.

The pictures that made their way to Twitter gave fans a glimpse into the time Akshay Kumar and Jacqueline Fernandez shared with Patel. They appeared to have enjoyed a meal together and posed for a few pictures too. Patel's caption read, "Bollywood actor and celebrity @akshaykumar and actress @Asli_Jacqueline, who were the guests of Daman for shooting of the film "Ramsetu", met today. Akshay Kumar thanked the U.T administration for immense support & praised the beauty of Daman." According to recent reports by Pinkvilla, the duo is shooting the climax of the film in Daman instead of Sri Lanka, where it was originally planned, as permission complications arose amid the COVID pandemic.

Bollywood actor and celebrity @akshaykumar and actress @Asli_Jacqueline , who were the guests of Daman for shooting of the film "Ramsetu", met today. Akshay thanked the U.T administration for immense support & praised the beauty of Daman. pic.twitter.com/1HllrcD4ft

Akshay Kumar and Jacqueline Fernandez seem to have a great equation, as Kumar had earlier posted a hilarious video of his co-star on his social media accounts that proved the same. Kumar showed his fans Jacqueline's ‘jugaad’ of curling her hair while in a helicopter. The video saw Jacqueline with her hair out of a small window of the chopper as she attempted to curl it naturally with the help of the wind outside. He captioned the video, "Ladies, here’s a hack for y’all courtesy Jacqueline Jugaadu! Watch and learn how to curl your hair mid-air in a helicopter @jacquelinef143"

Ram Setu will feature Akshay Kumar in an all-new avatar as he steps into the shoes of an archaeologist. The upcoming film is based on the history of the underwater bridge that links India and Sri Lanka. The filming of the upcoming project saw a few delays as some of the crew members on set tested positive for COVID during Diwali in 2020.