Neetu Kapoor took to Instagram today to share an adorable post of how her kids, Ranbir and Riddhima Kapoor are her inspiration in life. Know more here.

Neetu Kapoor, who is known to be very close to Ranbir and Riddhima Kapoor, has revealed that they are her inspiration in life. Neetu, who is also quite active on social media, wrote a long heartfelt note for her children where she mentioned that there is no age for learning. And that learning just strengthens one to face all the hard times in life.

She also wrote that times of trouble are the best teachers and that she keeps learning something new from her children every day. She shared an endearing picture of Ranbir Kapoor and Riddhima Kapoor as she posted a heartfelt caption.

Soon after she posted the picture, Riddhima was the first to reply with heart and lovestruck emojis. Not to mention, other Bollywood mothers including Sussanne Khan and Ekta Kapoor too appreciated Neetu’s heartfelt note for her kids. Netizens were was also gushing over Neetu Singh’s love for her kids and they flooded her post with a lot of love for the siblings and the proud mother. 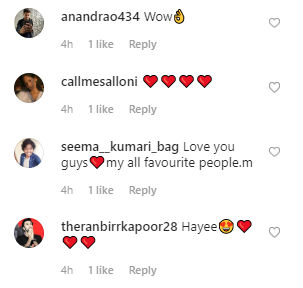 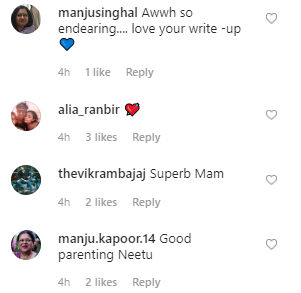 On the professional front, ‘Brahmastra’ starring Ranbir Kapoor and Alia Bhatt will be releasing in the summer of 2020. The film is said to be a romantic-fairytale in a supernatural format.

Besides the lead pair, the film also stars veteran actor Amitabh Bachchan, Dimple Kapadia, Akkineni Nagarjuna, and Mouni Roy. As per media reports, Mouni Roy who made her debut with Akshay Kumar starer 'Gold' will be featured as an antagonist in the film.

Moreover, reports suggest that the film will record some high-octane action sequences featuring Ranbir Kapoor. The movie is produced by Karan Johar under the banner of Dharma Productions.

PEOPLE HAVE PLEDGED SO FAR
LATEST NEWS
View all
1 hour ago
Abhishek Bachchan issues a 'Nisarga' warning to Mumbaikars about situation getting worse
58 mins ago
Lesser-known facts about Amitabh Bachchan's father Harivansh Rai Bachchan
27 mins ago
Amitabh Bachchan has worked in many hit films with Sanjay Dutt; See list here
31 mins ago
Kartik Aaryan reveals why he wants to marry a girl like Deepika Padukone; Read here
41 mins ago
Varun Dhawan shares a mesmerizing view of how his surrounding looks like during monsoons