Rhea Kapoor had a special message for her husband Karan Boolani as they enjoyed a cozy Amanbagh trip on the occasion of his birthday on Wednesday. 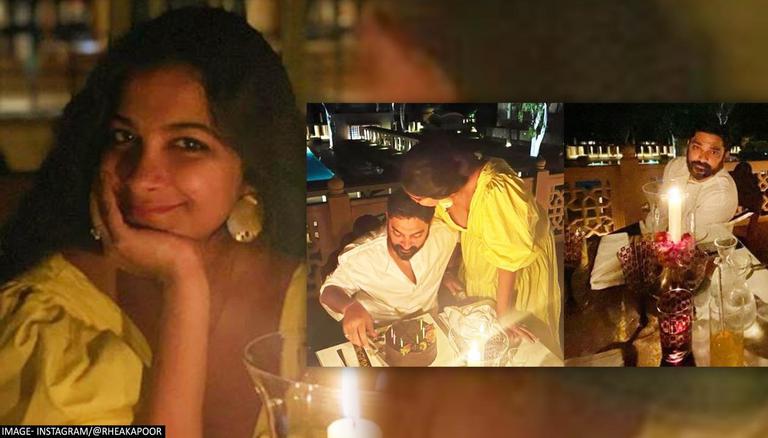 
The celebrations are continuing for Anil Kapoor's daughter, Rhea Kapoor, and director Karan Boolani this year. After the couple tied the knot earlier this year, the latest occasion to celebrate was the latter's birthday. The couple set off to Rajasthan to mark the special event.

Rhea and Karan were recently spotted at the Mumbai airport as they departed for their journey. Their destination was Amanbagh in Rajasthan. The duo seemed to be having a gala time at the venue of which the Veere Di Wedding producer dropped some stunning clicks, as well as left a loving note for her husband.

Rhea seemed to have arranged a surprise for Karan as she clicked him in a candle-lit setting in one of the pictures shared on Instagram. Apart from the beautifully arranged dinner table, the diyas and flowers on the floor added to the glow of the setting while the swimming pool and the Rajasthani-style architecture also stood out. Rhea held on to the director as he cut the cake and then the two then expressed their love for each other with a kiss.

She called Karan her 'partner in eveything'. She wrote that every year with him was 'more magical and fulfilling' for her. "There’s no one I would rather grow up with", she captioned it as she showered love on the birthday boy.

They also went out for a trip through the forest and also spotted some wildlife. Karan loved it so much that he captioned that there could not have been a better way to celebrate his birthday.

Rhea and Karan had got married after a 12-year relationship at her residence in Mumbai in a low-key ceremony on August 14.

She had then penned a note for him stating, "12 years later, I shouldn’t have been nervous or overwhelmed because you’re my best friend and the best guy ever. But I cried and shook and had stomach flips all the way through because I didn’t know how humbling the experience would be."

"I’ll always be that girl who had to come home to juhu at 11 pm before my parents fell asleep. Only until now I didn’t know how lucky I was to feel torn. I hope we make a family so close that we have many, many loves of our life.", she added.