Actor Sonam Kapoor’s sister Rhea who married her long-time boyfriend Karan Boolani on August 14, shared a series of pictures from her after-wedding party. 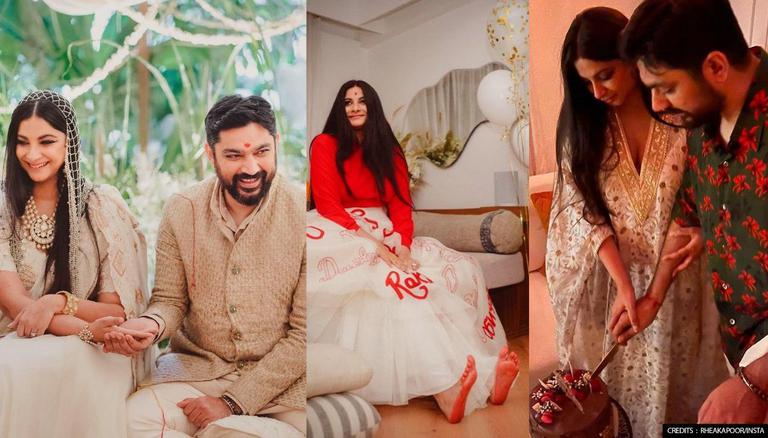 
Actor Sonam Kapoor’s sister Rhea Kapoor married her long-time boyfriend Karan Boolani on August 14, she shared a series of pictures from her after-wedding party that was hosted by her close friends. The fashion designer and producer took to her Instagram and gave a glimpse of the celebrations that were thrown by her friends and called it the "best reception ever." A grand reception was also thrown by Anil Kapoor at his Juhu residence for the family members earlier, where the Kapoor clan got together to celebrate the newlywed couple.

In the after-party pictures, Rhea showed her alta-covered feet and posed in a red and white dress with names written on it. The Abu Jani Sandeep Khosla ensemble seems to have the names of her friends inscribed on it. In one of the photos, Rhea Kapoor can be seen wearing a white outfit designed by her friend Masaba Gupta and cutting a cake with her husband Karan Boolani. Sharing the photos, Rhea wrote: "The after-party thrown by the best friends in the world because they can't help themselves is my love language. Best 'reception' ever." Karan Boolani on the other hand shared a series of videos of his pet dog during the after-party on his Instagram stories. Sonam’s husband Anand Ahuja was one of the first ones to comment below the post and wrote, “How has “Veere Di Wedding” not become the most quoted comment or a trending hashtag for your wedding yet??” 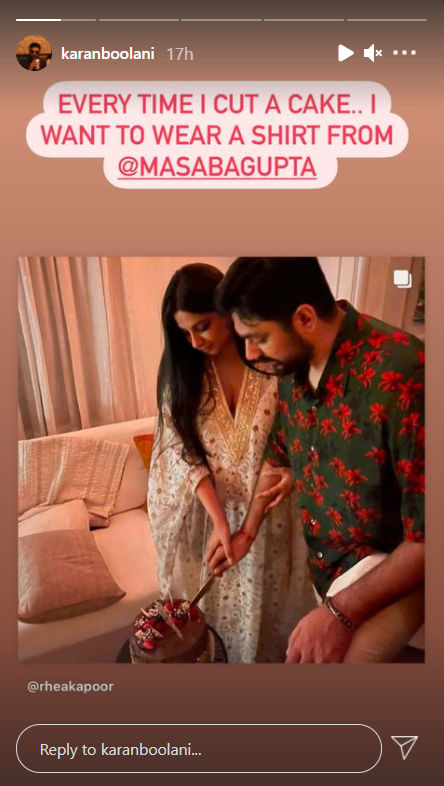 The couple had an intimate wedding which was attended by family members at Anil Kapoor’s Juhu residence. Rhea had shared the first picture from the wedding on Instagram with a heartwarming note that read, “12 years later, I shouldn't have been nervous or overwhelmed because you're my best friend and the best guy ever. But I cried and shook and had stomach flips all the way through because I didn't know how humbling the experience would be. I'll always be that girl who had to come home to Juhu at 11 pm before my parents fell asleep. Only until now, I didn't know how lucky I was to feel torn. I hope we make a family so close that we have many, many loves in our life. Mine are Karan Boolani, Sunita Kapoor, Anil Kapoor, Harsh Varrdhan Kapoor, and Sonam Kapoor (sic).”