Riddhima Kapoor Sahni stirs up nostalgia as she shares throwback pictures of parents Neetu Kapoor and Rishi Kapoor on her social media. Take a look.

Rishi Kapoor's daughter Riddhima Kapoor Sahni has been sharing a lot of pictures with the family on her social media. Continuing the same, Kapoor took to her social media stories to share a series of throwback pictures of her parents Neetu Kapoor and Rishi Kapoor. The first one is a black and white candid picture of the two where Neetu is happily looking elsewhere while Rishi is adorably staring at her. She captioned the post as, "Love". 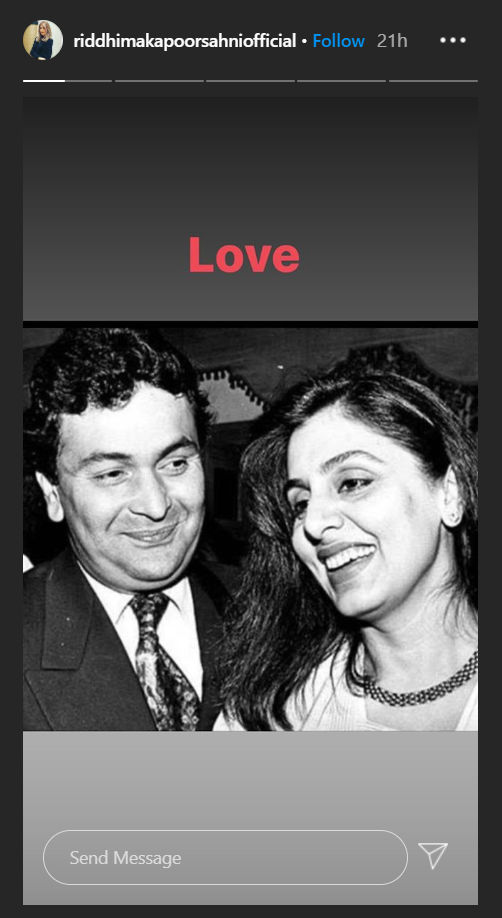 She also shared a solo picture of a young Neetu Kapoor and wrote "such a beauty". Lastly, she shared another picture of Rishi Kapoor with Neetu holding hands and walking together. The duo is all smiles in the picture as they got clicked candidly. Riddhima Kapoor Sahni tagged the picture as "Classic". 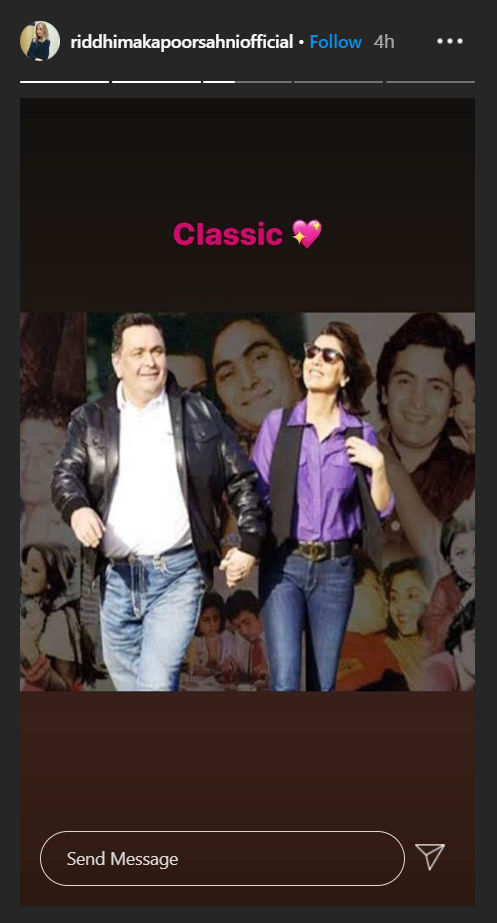 Veteran actor Rishi Kapoor passed away on April 30 at HN Reliance Foundation Hospital in Mumbai. Kapoor was hospitalised on after breathing complaints, as per his brother Randhir. Daughter Riddhima Kapoor Sahni could not fly in from Delhi due to the lockdown and had to drive down to Mumbai. She was spotted with Ranbir Kapoor, Alia Bhatt, and Neetu at Mumbai’s Banganga for the immersion of the actor's ashes.

A post shared by Riddhima Kapoor Sahni (RKS) (@riddhimakapoorsahniofficial) on May 12, 2020 at 5:24am PDT

A statement released regarding Rishi Kapoor's death read, "Our dear Rishi Kapoor passed away peacefully at 8:45 AM IST in hospital today after a two-year battle with leukaemia. The doctors and medical staff at the hospital said he kept them entertained to the last. He remained jovial and determined to live to the fullest right through two years of treatment across two continents. Family, friends, food and films remained his focus and everyone who met him during this time was amazed at how he did not let his illness get the better of him. He was grateful for the love of his fans that poured in from the world over. In his passing, they would all understand that he would like to be remembered with a smile and not with tears. In this hour of personal loss, we also recognise the world is going through a very difficult and troubled time. There are numerous restrictions around movement and gathering in public. We would like to request all his fans and well-wishers and friends of the family to please respect the laws that are in force. He would not have it any other way".

PEOPLE HAVE PLEDGED SO FAR
LATEST NEWS
View all
1 hour ago
Salman Khan, Jacqueline Fernandez spotted cycling near his farmhouse; locals excited
6 mins ago
Deepika Padukone's scenes from 'Chennai Express' that turned into funny GIFs
50 mins ago
Rani Mukerji starrer family dramas that should not be missed, see list here