Riddhima Kapoor took a stroll down the memory lane and shared a pic of Neetu Singh's birthday celebration in presence of late actor Rishi Kapoor. Check out.

Rishi Kapoor passed away at HN Reliance Hospital at the age of 67 on April 30. Since Rishi Kapoor's demise, Neetu Kapoor and Riddhima Kapoor Sahni have been sharing pictures of the late superstar recalling his fond memories. On May 12, Riddhima took to her Instagram story and shared a glimpse of Neetu Kapoor's birthday celebration in the presence of the former and also shared a rare old throwback picture with dad Rishi Kapoor.

Riddhima Kapoor, on Tuesday morning, treated fans with a picture with her family that features Neetu Kapoor, Bharat Sahni, daughter and dad, Rishi Kapoor. The photo is from Neetu Kapoor's birthday celebration. The family looks all smiles, as they happily pose for the camera. 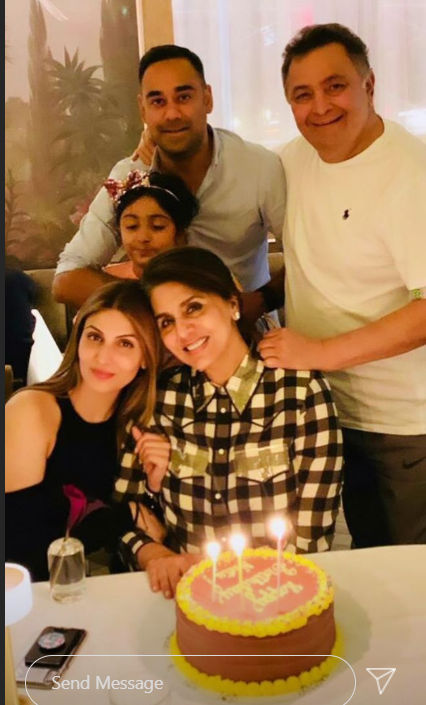 Riddhima Kapoor also took to her Instagram story and shared an old pic with late father Rishi Kapoor. While Riddhima looks all plumpy and cute, the Bobby actor beside her looks ever young and handsome. Take a look. 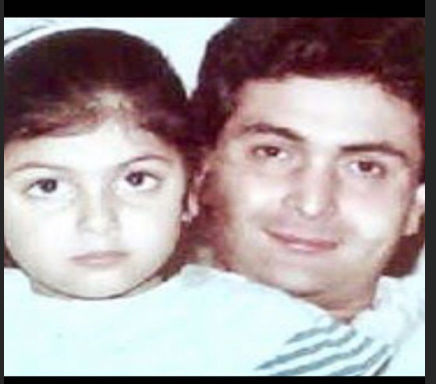 Meanwhile, on Monday night, Riddhima Kapoor shared a picture with parents Rishi Kapoor and Neetu Kapoor, in which the family is seen twinning in blue outfits. By the looks of it, the photo seems to be from one of their trips. Not to miss little Samara's goofy pose in the portrait. 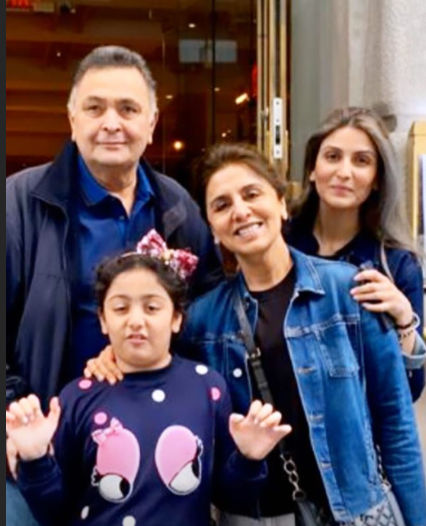 Also Read | 'Will always remember how you made me feel': Abhishek Bachchan mourns Rishi Kapoor's death

Riddhima Kapoor Sahni could not join her father's last rituals due to lockdown restrictions as she lives in Delhi. But as soon as she arrived in Mumbai, Neetu Kapoor and son Ranbir Kapoor, on May 3, organised a prayer meet for the veteran actor at their home. A photo from the meet went viral on the internet in which Ranbir and Neetu were seen getting clicked with Rishi Kapoor's picture.

"Our dear Rishi Kapoor passed away peacefully at 8:45am IST in hospital today after a two-year battle with leukemia. The doctors and medical staff at the hospital said he kept them entertained to the last. He remained jovial and determined to live to the fullest right through two years of treatment across two continents. Family, friends, food and films remained his focus and everyone who met him during this time was amazed at how he did not let his illness get the better of him. He was grateful for the love of his fans that poured in from the world over. In his passing, they would all understand that he would like to be remembered with a smile and not with tears. In this hour of personal loss, we also recognise the world is going through a very difficult and troubled time. There are numerous restrictions around movement and gathering in public. We would like to request all his fans and well-wishers and friends of the family to please respect the laws that are in force. He would not have it any other way."

PEOPLE HAVE PLEDGED SO FAR
LATEST NEWS
View all
2 hours ago
Mohit Chauhan reports fake account on his name, says, 'have complained to Instagram'
6 hours ago
Rihanna’s brand 'Fenty' suspends sales for ‘Blackout Tuesday’; issues statements
1 hour ago
Which is Taylor Swift's favourite song? How did she learn guitar? What did she first play?
11 hours ago
Neha Kakkar's latest throwback picture retells 'Story of Kakkars'; see pic
6 hours ago
BTS' Jeon Jung Kook melts fans' heart with his Festa 2020 song 'Still WIth You'