FWICE raises protest over viral video of Rishi Kapoor in ICU at HN Reliance Hospital. The video is unethical, &violates fundamental right to live with dignity.

The Federation of Western India Cine Employees (FWICE) on Saturday released a legal notice to Sir HN Reliance Foundation Hospital and mentioned that staff has unethically and secretly recorded a video of Rishi Kapoor's last dying moments from the ICU. Rishi Kapoor was admitted at HN Reliance Hospital and passed away on April 30 after fighting leukemia.

Condemning the act, Ashoke Pandit, on his Twitter handle wrote that the act is highly condemnable and disgusting breach of privacy of the legend. In the letter, it is mentioned that the video footage shows Rishi Kapoor on the hospital bed as a patient with an oxygen mask and in a pitiable state. The footage shows an attending nurse with the patient in the ICU recording in a clandestine manner without the permission of the patient or his family members.

The letter further mentioned that a similar incident had taken place at the time when actor Vinod Khanna was being treated at the same hospital and a similar video of his dying moments was widely circulated.

A secretly shot video of #RishiKapoor ji by a hospital staff with a hidden camera, is doing d rounds. It’s highly condemnable & the authorities at #HNReliance hospital nd to initiate an inquiry into this disgusting breach of privacy of the legend.@ril_foundation @RelianceMedical

I’m not referring to the one where the staff member is singing a song, next to Rishi ji. The other one that is being shared on Whatsapp, is highly disturbing & clearly taken without any permission, with a hidden camera. (2/2)@ril_foundation #HNReliance

The letter ended with a request to the authorities to initiate an in-depth inquiry and strict action. FWICE has asked the hospital to get back to them within 15 days or they shall be forced to take suitable legal action.

Condemning the act, Arjun Kapoor too on his Instagram story wrote, "The choice to not post something is sometimes as important as to be the first to post something. Images have a lot of power lest we forget. Sometimes humanity and empathy must prevail over being first to embrace use of sly voyeuristic material presented to you. Just sometimes." 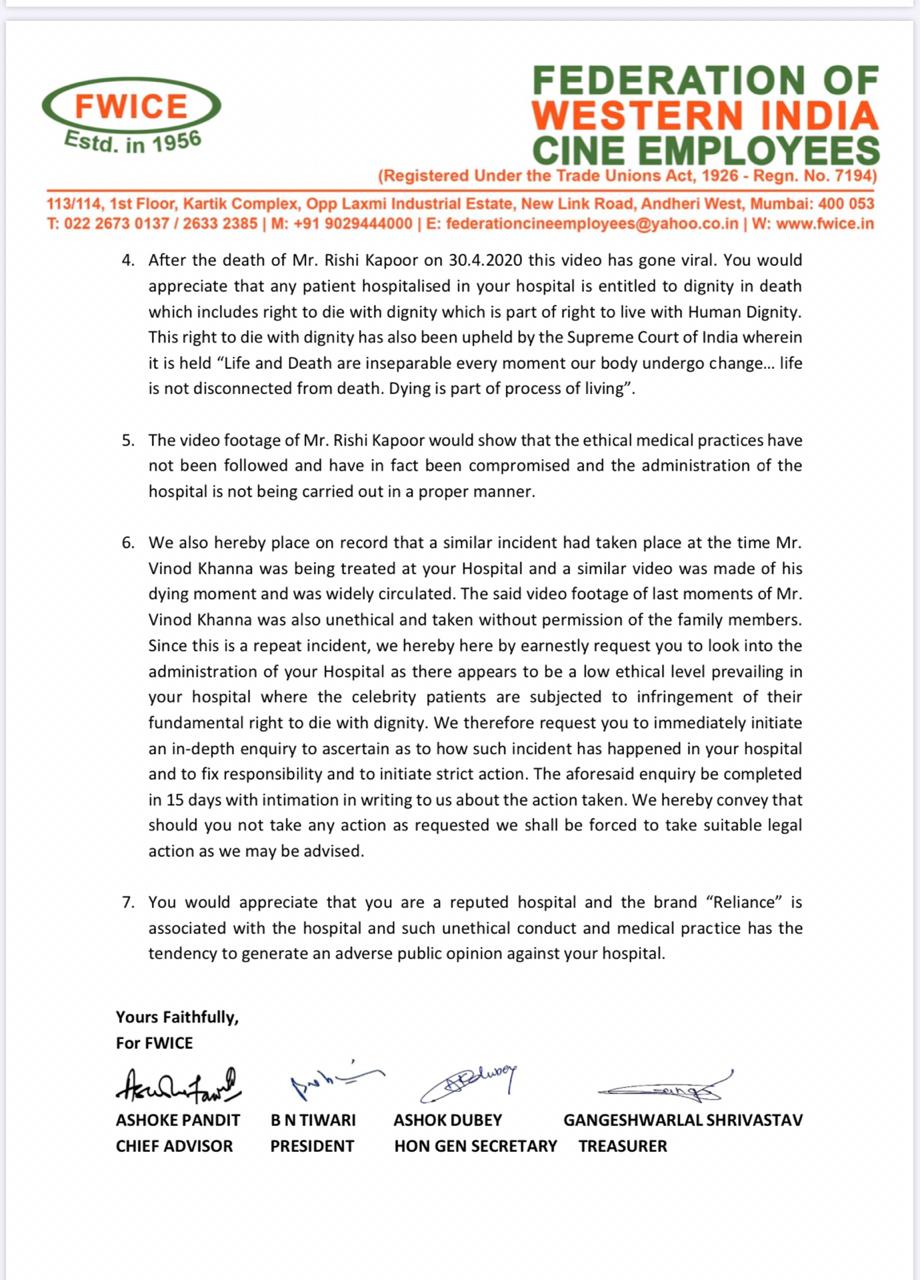