It is no secret that Sania Mirza and Parineeti Chopra share an amazing bond and are one of the most popular BFF pair in the country. Given their friendship, Sania's little one adorably calls Chopra 'Khala'. Parineeti shares a special bond not only with Sania but also with her son, Izhaan. 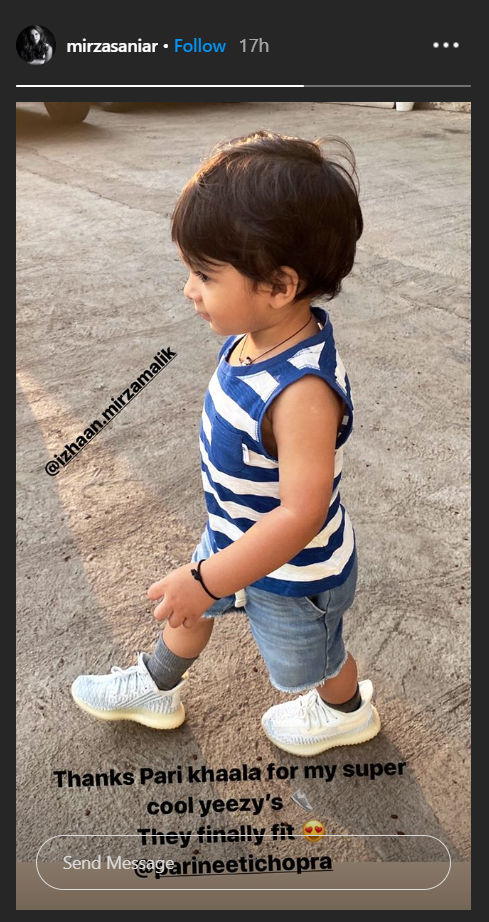 Sania Mirza recently took to her social media story to share an adorable picture Izhaan. The baby boy is seen adorably walking all decked up in a blue and white striped sleeves tank with a pair of blue denim shorts. He is all smile as he cheerfully faults his new Yeezys. In the caption, Mirza has thanked Parineeti Chopra on Izhaan's behalf saying, "Thanks Pari Khala for my super cool Yeezys. They finally fit."

Parineeti Chopra is often snapped together with the mother-daughter duo. Chopra earlier took to her social media to share a snap from the day she babysat Izhaan for Sania Mirza. She captioned the post, "I’m a khaala now!!!! Izzu is edible and I want to eat him, but for now I’m allowing him to eat my hand ðŸ’‹ðŸ’‹ @mirzasaniar Can I keep this child foreverrrrrr ðŸ˜ðŸ˜." [sic] Izhaan's picture with the Yeezys was also posted on his social media with the caption, "Drop it like it’s hot ðŸ”¥ðŸ˜ðŸ‘¶ðŸ½
Ps- Thanks Pari khaala for my yeezy’s @parineetichopra" [sic]

Parineeti Chopra revealed in a talk show how she became friends with Sania Mirza. She recalled that Mirza was asked in an interview who she would want to play her character in her biopic. Sania said that she would want Parineeti Chopra to play it. Chopra recalled that Mirza was playing the US Open at that time. Sania called her up and told her everything that happened because she felt like it was her responsibility to tell Chopra before it was all on the front pages.

PEOPLE HAVE PLEDGED SO FAR
LATEST NEWS
View all
10 hours ago
Katrina Kaif and Ranveer Singh to team up for Zoya Akhtar's next untitled film
12 hours ago
Akshay Kumar Quiz: How well do fans know Khiladi Kumar? Answers inside
11 hours ago
Tamannaah Bhatia makes a statement with 'All Lives Matter' post, receives mixed reactions