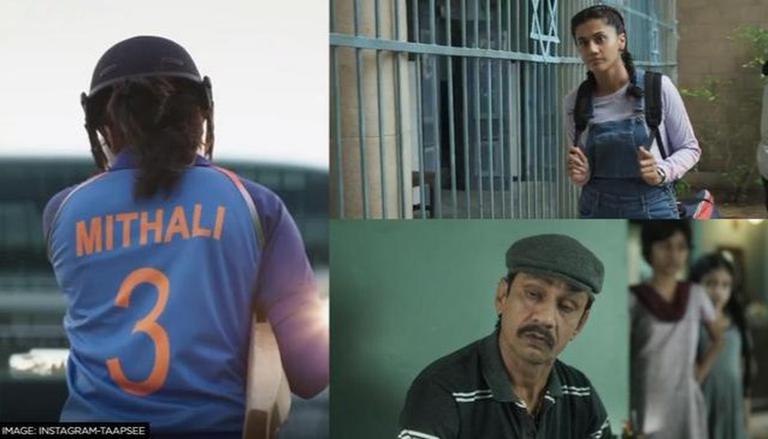 
Bollywood diva Taapsee Pannu is all set to bring on the untold story of former Indian women's cricket team skipper Mithali Raj in her upcoming biopic drama movie, Shabaash Mithu. The biopic drama will mark its theatrical debut on July 15. As the release date of the Taapsee Pannu starrer is inching closer, makers are leaving no stones unturned in promoting the project. After fueling fans' excitement levels with the teaser and first look posters of Shabaash Mithu, makers recently dropped the highly anticipated trailer of the sports drama film.

The film will witness Taapsee stepping into the shoes of Mithali Raj while showcasing her inspiring journey from an ordinary girl to becoming a notable name in the cricket fraternity.

Taapsee Pannu took to her Instagram handle on Monday and unveiled the trailer of her forthcoming film Shabaash Mithu. The trailer opens with her character, Mithali entering the field as the crowd around cheers "India, India" as she starts showcasing her flawless batting moves. She then says 'just like men in blue, we will also have a team soon called women in blue' while referring to the gentleman's game. The trailer then highlights Mithali's journey and all the hardships that she faces before becoming a renowned name in the world of cricket, along with inspiring millions of young girls across the world.

Sharing the trailer, Taapsee wrote in the caption, "Mithali Raj You know the name, now get ready to see the story behind what makes her the legend. Woman who redefined “The Gentleman’s game” She created HERSTORY and I’m honoured to bring it to you#ShabaashMithu 15th JULY 2022#ShabaashMithuTrailer #GirlWhoChangedTheGame"

Watch the trailer below:

Shabaash Mithu is helmed by Srijit Mukherji, while Viacom18 Studios is bankrolling it. The filming of the movie began in April 2019 and ended by November 2021. Many portions of the film were reportedly shot in Lord's cricket ground in London. The biopic film will hit the theatres next month.