Shabana Azmi revealed the 'secret of success' in marriage with Javed Akhtar. B-Town loved it as they celebrated 35th anniversary; She hailed their friendship.

One often says ‘couple goals’ for the newer lot of B-Town pairs. Recently married couples like Virat Kohli-Anushka Sharma, Sonam K Ahuja-Anand Ahuja, Deepika Padukone-Ranveer Singh, Priyanka Chopra-Nick Jonas are among those pairs, who the term is often used. However, Shabana Azmi proved she and Javed Akhtar definitely deserved this title with her adorable post for her husband on their 35th anniversary. The veteran revealed that the couple was ‘still smiling’ after spending 35 years together. The secret of their successful marriage, according to the writer-lyricist, has been their friendship, something that remained unaffected 'despite' their marriage.

Shabana Azmi-Javed Akhtar celebrated her 35th anniversary on Monday. Sharing a heartwarming snap on Instagram where the duo, dressed in traditional outfits, are sharing a hearty laugh, the Neerja star wrote, “35 yrs together today and still smiling mashallah ! Secret of success .. javed says we are such good friends that eve arriage couldnt destroy our friendship😂” (sic) The post received love from the Bollywood stars. Javed Akhtar’s children, Farhan Akhtar and Zoya Akhtar, who wished 'happy anniversary' and sent hearts respectively.  Tisca Chopra, Manish Malhotra, Swara Bhasker, Divya Dutta, Vikas Khanna, Shahana Goswami were among those who responded, some posting hearts, some laughing over Shabana Azmi’s comment and some terming them as their ‘fav couple.’ Here are the comments: 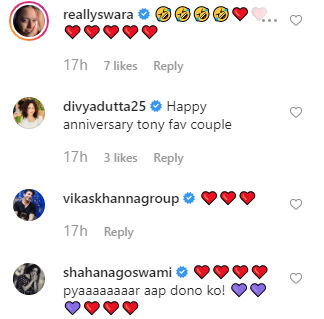 Javed Akhtar and Shabana Azmi had got married on December 9, 1984. It was the time when Shabana had established herself as an ‘offbeat’ actor, while the latter was delivering hits as a writer in collaboration with Salim Khan. The former was previously married to Honey Irani, a screenwriter in the film industry, with whom he had two children, Farhan and Zoya, both filmmakers.

On the professional front, Shabana Azmi recently joined the cast of Steven Spielberg-produced web series Halo. Javed Akhtar recently penned the lyrics for Ashutosh Gowariker’s Panipat. Previously, he has also written the songs for the filmmaker’s other iconic films like Lagaan, Jodhaa Akbar and Swades, even bagging awards for it.