Shanaya Kapoor recently took to her Instagram handle to share a bunch of throwback photos with "mumma" Maheep Kapoor to wish her on her birthday; see pics


The Fabulous Lives of Bollywood Wives actor Maheep Kapoor rings in her 39th birthday today, i.e. April 29, 2021. While FLBW co-stars Bhavana Pandey, Seema Khan and Neelam Kothari extended sweet birthday wishes for her on Instagram, Maheep's daughter Shanaya Kapoor took a stroll down memory lane and shared some unseen throwback photographs from their family album to wish her beloved "mumma" a "Happy Birthday". Soon after her birthday wish for Maheep surfaced on social media, netizens flocked to the comment section of her post to shower the mother-daughter duo with immense love.

Shanaya Kapoor's mother, Maheep Kapoor turned a year older today and to make her special day even more special, the 21-year-old dug up their family album to share a few rare photographs on social media. Earlier today, the starkid took to her Instagram handle to post photographs of herself with her mom and dad from her childhood days. In the first photo, Maheep could be seen taking a stroll on a beach while in the second photo, the FLBW star posed for the camera with a baby Shanaya from back in the day.

Furthermore, the third aww-dorable photo saw a young Shanaya flashing her million-dollar smile at the camera as she posed with father Sanjay and mother Maheep. The last photo shared by Shanaya was a candid photograph of her "bestie" during her pregnancy days as she could be seen flaunting her baby bump. Posting the photos on her Instagram, she wrote, "Happy birthday bestie. I love you mumma".

In no time after Shanaya's post surfaced online, the cutesy throwback photos were quick to win netizens' hearts as many users slid into the comment section of her post to share their reactions about the same and wish Maheep Kapoor on her birthday. One user wrote, "Happy Birthday to your bestie... your mumma", another commented, "Cutest pictures". In addition to that, Maheep also commented on her daughter's IG post and wrote, "Love you my pumpkin".

READ | Shanaya Kapoor reveals her coffee addiction, Navya Nanda has a special comment for her

Take a look at some more reactions by netizens below: 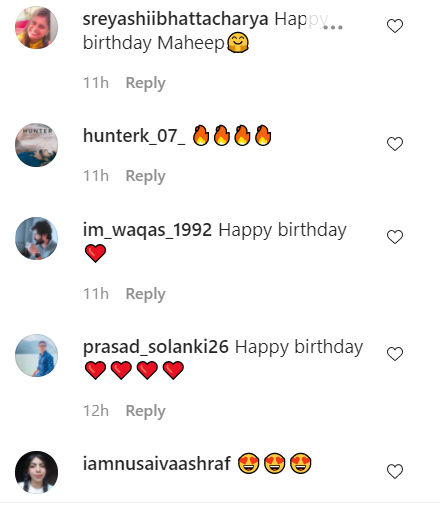