On the occasion of Raksha Bandhan, Shershaah Vikram Batra's sister Nutan remembered the Kargil hero, while celebrating the festival with his twin, Vishal Batra. 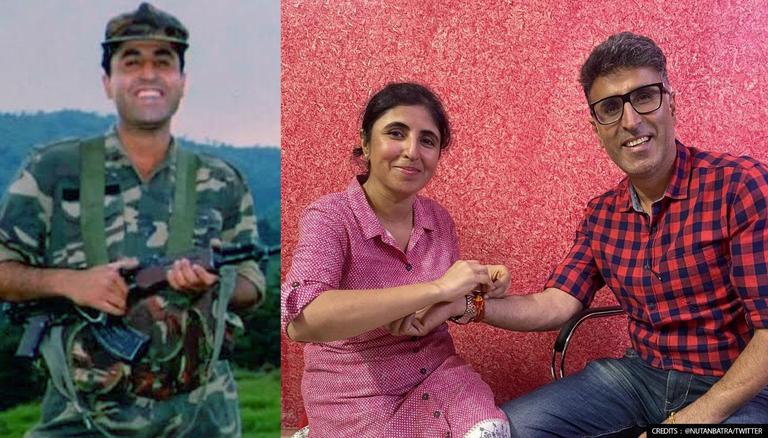 
India celebrated Raksha Bandhan, the auspicious festival of rejoicing the love-filled bond between a brother and sister on Sunday, with many netizens and celebrities posting pictures with their siblings, clicking family photos and eating sweetmeats. Amid the beautiful chaos of social media yesterday, one such special message came from the sister of one of the nation's most celebrated heroes, the one who hailed the logo ' Yeh Dil Maange More', Captain Vikram Batra.

The late Kargil hero's sister, Nutan Batra Malik, took to Twitter and wished the PVC awardee on the festival of Rakhi. Sharing a beautiful photo of the Captain in his uniform, she wrote," Happy Rakhi Vikram." Take a look.

Vikram Batra is survived by his parents and three siblings, a brother and two sisters. His eldest sister Nutan celebrated the festival with brother Vishal Batra and shared heartwarming photos as she tied the Rakhi to Vikram's twin. Blessing him on the day, she wrote, "Vishal has just managed to come for Raksha Bandhan. He is always super busy God bless you with a long life and loads of success dear@vishalbatra1974." She also thanked everyone on social media for their love and blessings.

Vishal has just managed to come for rakshabandhan. He is always super busy 😅❤
God bless you with a long life and loads of success dear@vishalbatra1974 pic.twitter.com/pvmj4uBjxs

The Param Vir Chakra awardee, hailing from the Palampur district of Himachal Pradesh, sacrificed his life at the age of 24 during the Kargil War. After completing his early education in Palam, he later enrolled at Chandigarh University for further studies in Science, during which he got into the National Cadet Corps (NCC) in the first year of his college.

READ | 'Shershaah' achieves IMDb feat in a week; Sidharth Malhotra feels 'on top of the world'

The war hero enrolled in the Indian Military Academy in 1996, and later next year he was included on the post of lieutenant in 13 Jammu and Kashmir Rifles. Serving the nation, Captain Vikram Batra was martyred on 7 July 1999 and later awarded the Param Vir Chakra posthumously on 15 August 1999.

Shershaah: A tribute to the legend of Vikram Batra

A Bollywood film starring Siddharth Malhotra and Kiara Advani called Shershaah has recently been released, paying homage to Vikram Batra. The film stars Sidharth Malhotra as Batra and Kiara Advani as his girlfriend Dimple Cheema and follows the Captain's life, from his first posting in the army to his death in the Kargil War. The film then premiered on 12 August 2021 on Amazon Prime Video and has been a blockbuster hit, with audiences lauding the actors' performances and the action sequences while cherishing the life of India's braveheart, Batra.