Sonam Kapoor headed to her Instagram handle and uploaded a short clip featuring her showcasing her postpartum belly after her son's birth. 
New mom Sonam Kapoor welcomed her first child, which is a baby boy, with husband Anand Ahuja on August 20. The Neerja actor is undeniably all over the moon and on Thursday, took to her social media space and shared a quick update about life for the first time after coming home post her son’s arrival.

Sonam headed to her Instagram handle and uploaded a short clip featuring her postpartum belly after her son's birth. The video saw the 37-year-old actor saying that she is still wearing maternity clothes. Sonam could be seen wearing black pants with a matching baggy jacket and glasses. The actor said in the video, "Still wearing my maternity. Tummy’s not completely in yet but looks great." 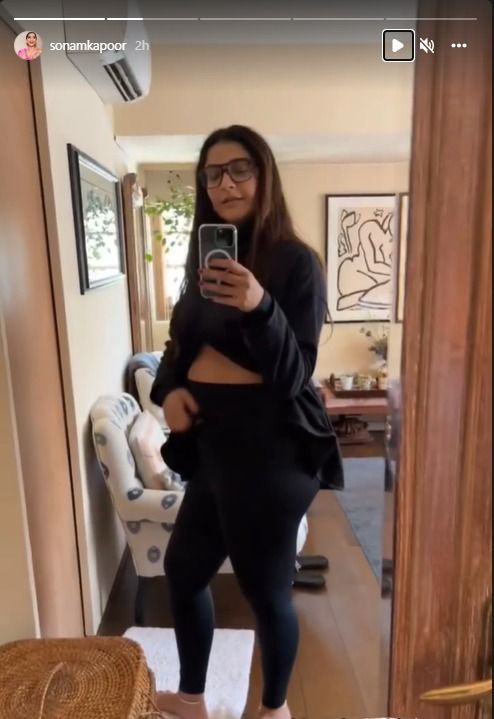 Sonam Kapoor and Anand Ahuja announced the arrival of a baby boy on August 20. The couple took to social media and penned down a note to announce the good news. The couple wrote, "We are delighted to announce, on the 20th of August 2012, the arrival of the newest member of our family. Sonam and Anand have been blessed with a healthy baby and we couldn't be more elated. Our hearts are bursting with pride and love for the new parents and their beautiful angel. Doting grandparents Harish & Priya, Anil & Sunita. Excited aunties and uncles Rhea & Karan, Anant & Harshvardhan (sic)."

A few days later, Sonam returned to father-actor Anil Kapoor’s house after getting discharged from the hospital. The actor donned a white kurta, while Anand Ahuja opted for a white t-shirt and black pants. As the couple entered the house, they were welcomed with a pooja ceremony. Soon after the new mom and her baby boy came back home, Anand and Anil stepped out to distribute sweets to the media personnel.

Sonam is all set to star in Sujoy Ghosh’s production, Blind. Recently, she opened up about her career after the baby's arrival. The actor said in a statement to Vogue,

"I always was a little picky. I’m not really in the rat race, I’m just doing my own thing. I don’t think that will change, but priorities do change and I think that the child will become mine. The truth of the matter is that they didn’t choose to come into this world. You decided to bring them here, so it’s a very selfish decision. I will try to do the best I can as a mother, which means that acting will definitely take a backseat, but I don’t think I will ever stop working completely."