Sunny Kaushal, who is quite active on social media and is known for entertaining his fans with funny content, recently shared another hilarious video. Watch.

On March 9, Sunny Kaushal took to his Instagram handle and gave fans a sneak-peek into his Sunday plans. He posted a hilarious video, wherein he was seen showing his two varied moods. Here, Sunny Kaushal went from being a 'tough' boy to being a 'delicated' person, real quick. Sharing the funny video on social media, the star said, "à¤µà¤Ÿà¥à¤Ÿ à¤­à¥€, à¤¨à¤œà¤¼à¤¾à¤•à¤¤ à¤­à¥€" (tough too, delicate too).

In Sunny Kaushal's Instagram post, the actor was recorded while he was driving. The short clip is split into two sections, showing two different moods of Sunny. In it, Kaushal is seen donning a beige teeshirt, paired with denim pants. He sported tinted sunglasses and one can also spot his mask wrapped around his neck.

In the first half of Sunny Kaushal's video, he is seen vibing to Diljit Dosanjh's popular Punjabi song, Clash. This song depicts Sunny's rough and tough mood. Meanwhile, in the second video, he is seen enacting Megan Thee Stallion & Normani's Diamonds from Birds of Prey: The Album.

Fans and followers of Sunny Kaushal were quick to share their reactions in the comment section. One of the users wrote, "HAHAHA OMG I LOVEEE THIS #sunsunnytravels yeaah?", while another added, "Khatam.. swaahaaðŸ”¥.. meri mataji bhi behosh" (finished finally, my mom also fainted). A fan commented, "Fav. Brown munda" and another added, "Waah sunnyyyyðŸ”¥â¤ï¸you are so talented". Check out some more fans' reactions below. 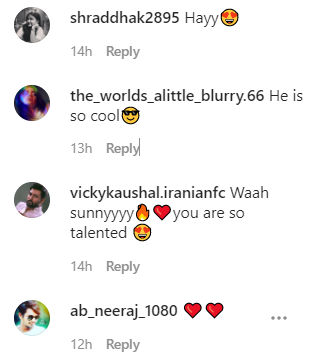 On the work front, he was last seen in a comedy-drama flick, Bhangra Paa Le. Released in 2020, the film stars Sunny Kaushal and Rukshar Dhillon in the lead. Helmed by debutant Sneha Taurani, it also features Shriya Pilgaonkar, Parmeet Sethi, Jayati Bhatia, Samir Soni and many others.

For his next, he will be seen opposite Nushrratt Bharuccha and Vijay Varma in Hurdang. Helmed by Nikhil Nagesh Bhatt, the film is a love story set in the student agitation of 1990 in Allahabad. Sunny Kaushal also boats the cast ensemble of Shiddat: Journey Beyond Love, alongside Radhika Madan, Mohit Raina and Diana Penty.