The newbie of the Bollywood, Ahan Shetty, has always managed to make headlines with his adorable social media banter with his ladylove Tania Shroff. See here.

many celebrities love indulging in some social media PDA where they go on to give fans complete couple goals. Ahan Shetty has always managed to make headlines with his adorable social media banter with his ladylove Tania Shroff. And their recent adorable banter will make you smile.

Tania Shroff recently took to Instagram to share a stunning picture of her covered in a towel taking a mirror selfie. The picture posted by her was loved by her fans and friends but seems like more than anyone beau Ahan Shetty loved it the most. 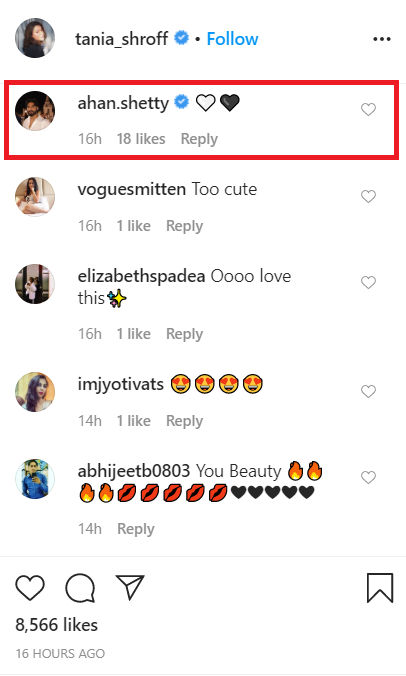 According to reports, the two have been dating since their school days. The two often share adorable pictures. Looking at their Instagram handle it is quite evident that two love travelling as they go on to post several travel pictures on their social media handle. They also keep leaving adorable comments on each other’s post. Check out a few adorable pictures of them below.

Ahan Shetty is all set to star alongside Tara Sutaria in his debut film titled Tadap. The film is reportedly based on a thriller genre and is a remake of the South Indian film RX 100. The film Tadap is directed by Milan Luthria. As per reports, the film is also expected to release on September 18, 2020.