Tara Sutaria is all set for the release of her upcoming movie, Marjaavaan, opposite Siddharth Malhotra. She announces the release of the first song Tum Hi Aana.

Tara Sutaria started her television career with Disney India’s Big Bada Boom in 2010. The child actor then went on to star in sitcoms such as The Suite Life of Karan & Kabir in 2012, and Oye Jassie in 2013. Sutaria made her Bollywood debut with Punit Malhotra’s film Student of the Year 2. She currently has many films in the pipeline and regularly posts about them on social media.

Tara Sutaria is busy gearing up for her upcoming film Marjaavaan alongside Riteish Deshmukh, Sidharth Malhotra, and Rakul Preet Singh in the lead roles. Directed by Milap Zaveri, the film is slated to release on November 8, 2019.

Tara Sutaria retweeted the release date of Marjaavaan’s first song, Tum Hi Aana, on Twitter. Announced by the renowned music label and film production company T-Series, the song is all set to be released on October 3, 2019. The caption reads, “Dive into the feeling of love with #TumHiAana. 3rd October ko hoga yeh milaap! #Marjaavaan” 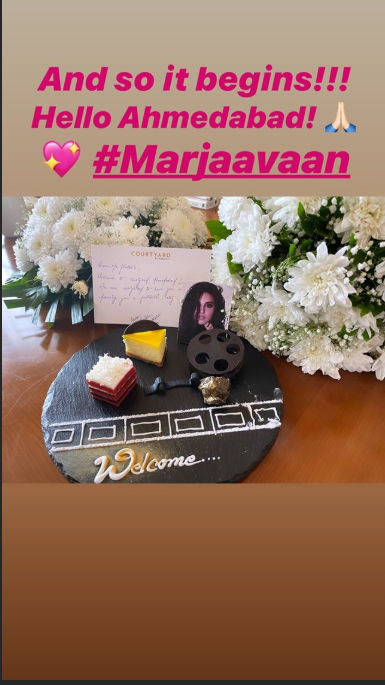 About her character in the film

Tara Sutaria, in a media interaction, revealed that her character is mute. The actor added that she learnt sign language for Marjaavaan. Moreover, the Student of the Year 2 actor thinks that sign language is a wonderful way to communicate and she will use it in real life while travelling.

Tara Sutaria will soon feature in romantic action film Tadap. Directed by Milan Luthria and produced by Sajid Nadiadwala, the upcoming movie will star debutant Ahan Shetty besides Tara Sutaria. Tadap is a remake of a Telugu film RX 100, which was released in 2018. According to an online movie database, this film will hit theatres on September 18, 2020.