Tiger Shroff shared a video of himself in the gym practising some moves that required utmost skill on his part. See how his rumoured GF Disha Patani reacted.

Tiger Shroff shared a video of himself on Instagram on March 22, 2021, which showed the actor practising some moves in the gym. In the video, Tiger Shroff can be seen getting ready to practice something while his trainer is standing on a pedestal with a sponge square in his mouth. The actor then skillfully does a jump and a spin and as the video transitions to a slow-motion, he can be seen accurately hitting the sponge at the right place without his leg ever touching the face of his trainer. Tiger Shroff has captioned his video by calling the act a ‘trust game’ while tagging his trainer.

Tiger Shroff’s video is a testimony to skill and precision as an inch in the wrong direction or a miscalculation on his part could seriously injure his trainer. At the start of the video, Tiger Shroff can be seen casually shrugging as though he did not know what he was doing. After he pulled off the move he could be seen flaunting his muscles for the camera. Tiger Shroff is wearing a blue and yellow tank top with an olive green pair of sweatpants for his workout session with his personal trainer.

READ | Tiger Shroff-Disha Patani step out in style; their companion too gets love from fans 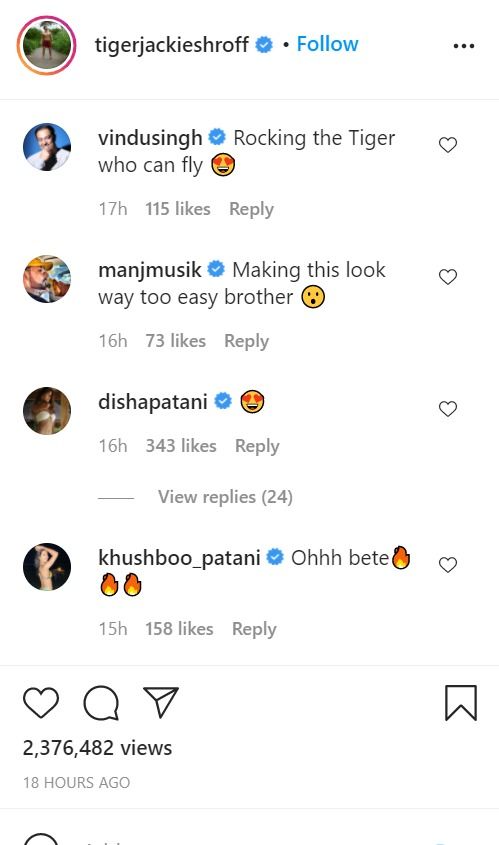 Tiger Shroff’s Instagram post received a total of 2.3 million views and 5,080 comments and still counting. Most of the people were really appreciative of Shroff and his skill in pulling off the task. Many people from the industry also took to the comments to express their appreciation. Tiger Shroff received a lot of “wow’s”. Some of his friends from the industry asked him how he managed to make the difficult move look so easy. Many others commented with emojis expressing their appreciation for the actor.

On the occasion of his birthday on March 2, 2021, Tiger Shroff shared the poster of Heropanti 2 announcing the film. He said in his caption to the post, “My first love is back â¤ï¸ action, thrill, like never before! Let's celebrate this one together on the 3rd of December in cinemas ðŸ¥³â¤ï¸”. In the poster, Tiger Shroff can be seen in a black suit standing on top of a car with guns in both of his hands pointed in either direction.