Kartik Aaryan has been on a 'No shave' ritual amidst lockdown and 'Piku' actor Deepika Padukone has an answer to Kartik's big problem currently. Read here —

With the country under lockdown, Kartik Aaryan like many others has been quarantining at home and not availing salon services that include a hair cut or a beard trim. While many have taken their partner's help to get their haircuts or trimmed their beard at home, Kartik has been on a 'No shave' ritual probably. 'Piku' actor Deepika Padukone has an answer to Kartik's big problem currently.

Aaryan went on his Instagram to ask his fans what should he do — Trim the beard or not? Explaining why he is tensed, he explained that his family hasn't given him any food since morning. He shared his mother's reaction — No food till the beard has trimmed/cut totally.

During the Live Session, Deepika dropped an emoji of a girl raising her hand, which means she wants him to trim the beard. Designer and stylist Anaita Shroff Adjania didn't agree with Padukone and wrote, 'No' and said, 'Learn cooking' instead if family isn't giving food.

Minute later, Kartik's sister then comes with a plate that had a trimmer and a shaver. And Kartik put up a poll on his Instagram handle with two pictures of his saying — Please Help — Sexy or Jungli, the moment of Truth. 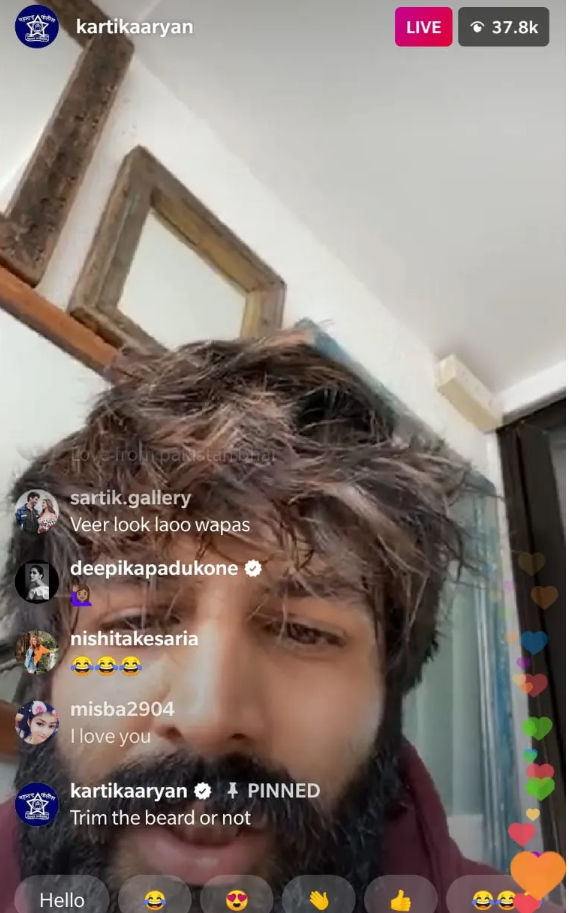 This is not the first time Kartik has raised a question about his beard. About two weeks back, he called up director and friend Farah Khan to ask about the same.

Kartik Aaryan's popular series Koki Poochega's 4th episode had an 'informative' cameo by director Farah Khan whom he addressed as 'health expert' in his caption. In a small clip shared by Kartik on his Instagram handle, Farah was seen hilariously bashing Kartik for calling her to trouble.

The first question Kartik posed was whether he should cut his beard. To this, Farah, in her own style said, "Yes, please trim it a little as it will help to make a wig for a bald person (Kisi Ka wig ban jaayega, kisi takle ka bhala ho jaayega)."