'Unethical': Aahana Kumra Upset With Airline For Cancelling Flight Without Informing Her

Actor Aahana Kumra expressed displeasure after an airline, without prior information, cancelled her flight. She took to Twitter and penned her views about same.

Actor Aahana Kumra took to Twitter on March 8 and expressed displeasure as an airline cancelled her flight without prior information. He went on to tag the airline and tweeted, "Thanks for cancelling a flight and then not informing the passenger.” As soon as her tweet was up, the airline was quick to reply to her complaint. Their Twitter thread read, “Hi Aahana, we would request you to share your PNR via DM so we may check.”

However, the Khuda Haafiz actor was irked by their service. Despite their concern, she further opined her thoughts about the same. In another tweet, she “strongly urged passengers to avoid booking themselves on this flight” and went on to call it  “absolutely unethical.”

Aahana Kumra is upset with airline 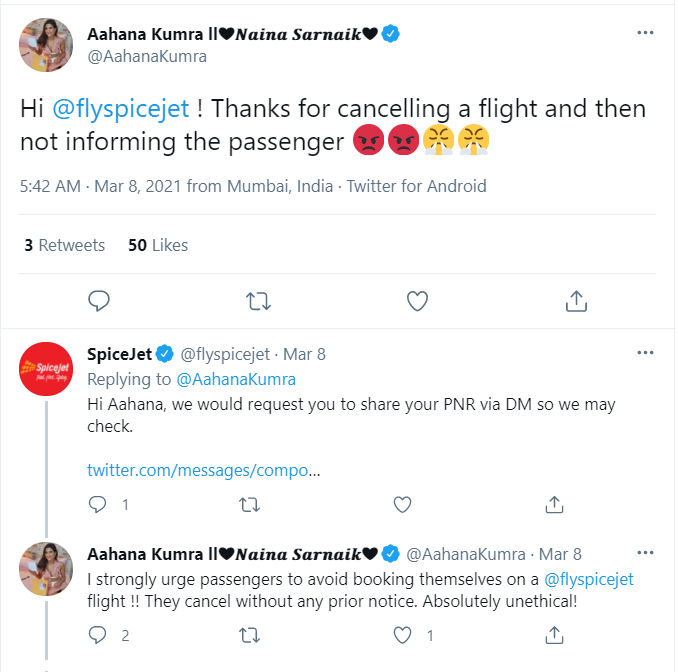 Meanwhile, on the work front, Aahana Kumra was last seen in the movie, Khuda Haafiz, alongside Vidyut Jammwal and Shivaleeka Oberoi. The film follows the story of how a man gets to any lengths to rescue his wife who gets abducted by a group of affluent people in an unknown country. Khuda Haafiz, directed by Faruk Kabir, received rave reviews from fans.

Meanwhile, the actor announced on Tuesday afternoon that she wrapped up shooting for her upcoming movie, India Lockdown. "And it's officially a wrap for India Lockdown! What an incredible experience and the oh so entertaining Madhur Bhandarkar! You're truly a Jalwa," she wrote while sharing a glimpse from the sets. Apart from her, the movie also stars Prateik Babbar, Sai Tamhankar, Shweta Basu Prasad, Prakash Belawadi, Zarin Shihab, and Ayeesha Aimen in prominent roles. India Lockdown is inspired by true events and is produced by Bhandarkar Entertainment and PJ Motion pictures.

Apart from this, Kumra is working on the short film titled Happy Birthday, alongside Anupam Kher. The thriller is being directed by Prasad Kadam. Aahana penned a lengthy heartfelt note for Kher after she received his book, Your Best Day Is Today. She thanked Anupam for always inspiring her with his never-ending enthusiasm and zest. More so, she expressed excitement and wrote that she can't wait to begin working with him.

READ | Janhvi Kapoor cuddles with her assistant's baby at 'Roohi' screening, poses with his fam