Did Varun Dhawan & Katrina Kaif Drop Hints That They Were Working On A Project Together?

Varun Dhawan recently shared a throwback photo while reminiscing his gym days, but Katrina Kaif's comment draws all the attention as she dropped a hint.

The current pandemic situation, that is the outbreak of the novel Coronavirus COVID-19, has pushed people indoors around the globe. While many are enjoying this self-quarantine, a few are waiting to go out again. Being one of them, Bollywood actor Varun Dhawan has also expressed how much he is missing work out days in the gym. But his post has drawn the attention towards something else as Katrina Kaif's comment has dropped hints at a project of them together.

Is Varun gearing up for a project with Katrina?

Interestingly, Varun Dhawan took to his social media handle and shared a throwback picture of him. The Badrinath Ki Dulhnia actor is seen posing shirtless in the picture. Instagramming the photo, he wrote a caption that read, 'Jab mein gym jata tha ab toh mein bas ghar pe hoon'. The post has garnered more than 1 million likes and thousands of comments.

Check out the picture below:

READ | Koffee With Karan 6 | Before Pairing Up On The Silver Screen, Katrina Kaif And Varun Dhawan Appear Together At The 'Koffee House' 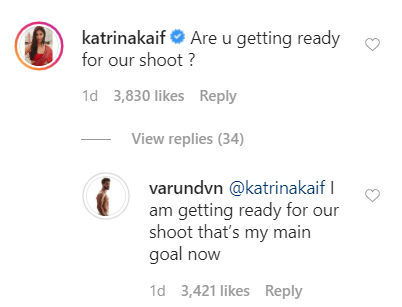 For the unversed, earlier Katrina Kaif and Varun Dhawan joined hands for Remo D'Souza' dance-drama Street Dancer 3D. The appearance of the duo on a celebrity chat show elated the audience and fans to see them together on the big screen. But due to some reasons, Katrina Kaif backed out of the project. And later, Sharddha Kapoor essayed the female lead. Now it will be interesting when the audience can watch them romancing and sharing the screen space.