Vivek Oberoi in his tweet for PM Modi used the hashtag of Salman Khan's film, Bharat. The actor deleted the tweet after he realised his mistake

Bollywood celebrity Vivek Oberoi was invited to the national capital to attend the swearing-in ceremony of Prime Minister Narendra Modi on May 30.

Oberoi referred to Modi's oath-taking day as a "big day for the whole country" and took to Twitter to express the same. But looks like Vivek Oberoi is coming under the spotlight for all the wrong reasons.

The actor who was recently in news for sharing a distasteful tweet on Aishwarya Rai, tweeted a picture with PM Narendra Modi and wrote: "Honoured to be invited again to the swearing-in ceremony. I’m watching @narendramodi bhai taking his oath for the 3rd time on his journey from CM Gujarat to PM of #Bharat once again! Feeling like a small part of an incredible history #ModiSarkar2 #NamoAgain #ModiSwearingIn."

Vivek Oberoi probably didn't realise that he accidentally promoted Salman Khan's upcoming mega film by using #Bharat with Salman Khan's emoji with it. The users immediately started trolling Vivek Oberoi and the actor deleted the tweet only to correct it later and posted again.

Below are the screenshots from Vivek Oberoi's Twitter handle: 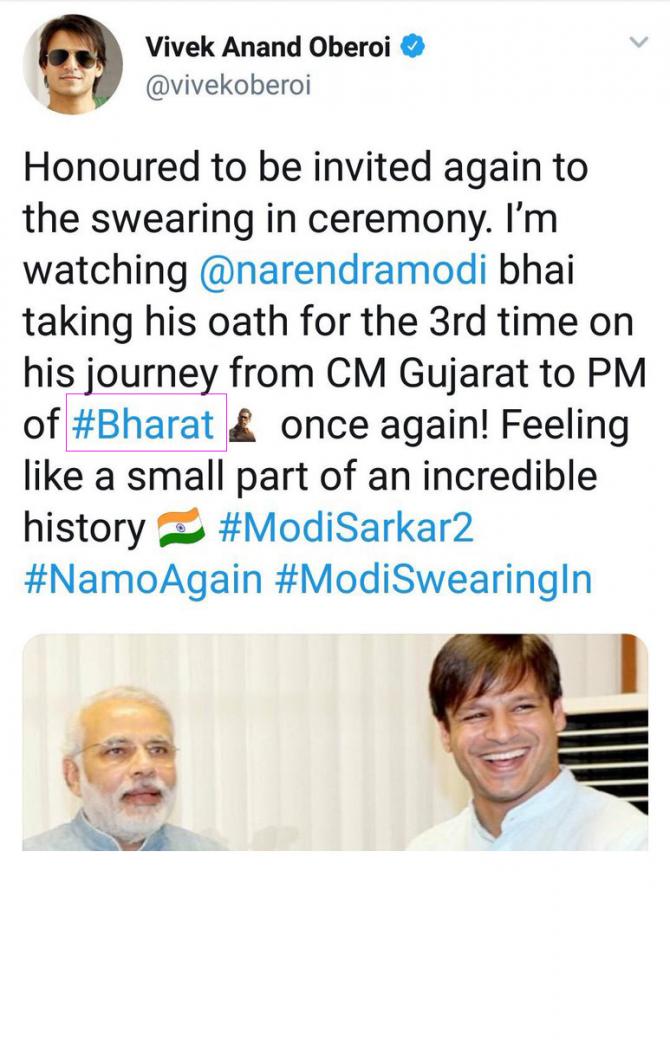 Honoured to be invited again to the swearing in ceremony. I’m watching @narendramodi bhai taking his oath for the 3rd time on his journey from CM Gujarat to PM of Bharat once again! Feeling like a small part of an incredible history 🇮🇳 #ModiSarkar2 #NamoAgain #ModiSwearingIn pic.twitter.com/jzk1jV6lVn

Vivek Oberoi recently starred in the biopic 'PM Narendra Modi' which made it to the big screens last week after much controversy. The film depicts the journey of Modi from his humble beginnings to his years as a chief minister and finally his landmark election as the prime minister of the country.

The film managed to get a lukewarm start with its day-1 collection totalling to Rs. 2.88 crore.

Meanwhile, coming back to Vivek Oberoi's controversial tweet, the actor apologized for sharing a meme on Aishwarya Rai Bachchan's personal life after severe criticism on social media and elsewhere, but that cut little ice with a charity organization that dropped him from a fund-raising event. Oberoi, who received a notice from the National Commission for Women asking for an explanation for sharing the "insulting" and "misogynistic" tweet, also deleted the controversial post.

"Even if one woman is offended by my reply to the meme, it calls for remedial action. Apologies.. tweet deleted," the actor wrote.