'We hate drugs' was the slogan of Bollywood stars like Amitabh Bachchan, Aamir Khan and others at veteran director Subhash Ghai's 1990 event 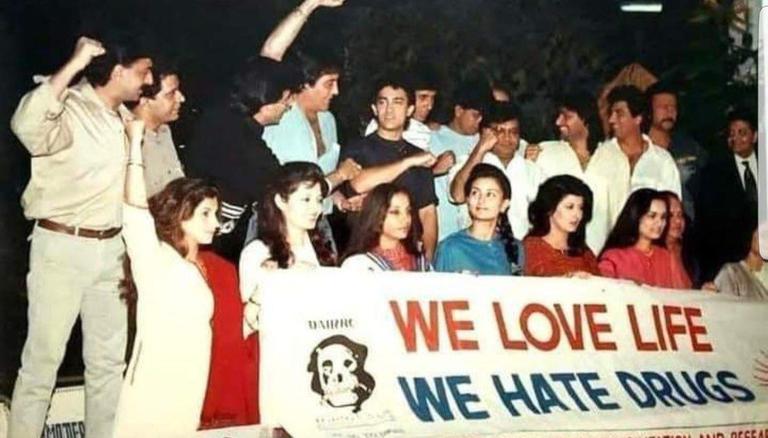 
Bollywood celebrities have reacted to actor Shah Rukh Khan's son Aryan Khan's arrest in a drugs case in several different ways. After many celebrities rushed to defend the star son, some refused to take a side while expressing shock. The latest to share his thoughts on the controversy was Subhash Ghai, who did so without mentioning the name of Pardes actor's son.

The veteran filmmaker, who has delivered many hits in his career, sent out a message against drugs. He did so by sharing a throwback image of the celebrities of the film industry, currently tainted by allegations of drug abuse, coming together and expressing their stand.

Subhash Ghai recalls Bollywood's 'No to Drugs' stand in 1990

Many of them could be seen pumping their fists as they held the banner that read ' We love life. We hate drugs.' He wrote that the industry still protests against ’Drugs -the Evil’. "May God save our children from this monstrous evil," wrote Ghai as he concluded his message.

Among the other celebrities who reacted to Aryan Khan's arrest were Suniel Shetty, Sussanne Khan, Pooja Bhatt, Hansal Mehta, Rajpal Yadav and Suchitra Krishnamoorthi. Most of them expressed their solidarity with Aryan Khan's parents Shah Rukh Khan and Gauri Khan. Suniel and Sussanne, however, called Aryan a 'child' and that people should give him a 'breather.'

Aryan Khan is currently in Narcotics Control Bureau custody after the investigating agency held him and others in a raid at a party on a ship off the Mumbai coast on Saturday. The NCB stated that they swung into action after a two-week gathering of intelligence and their operation involved officials posing as commoners. He was arrested on October 4 and was sent to NCB custody till 7 October. The NCB has stated that they are probing the case further.