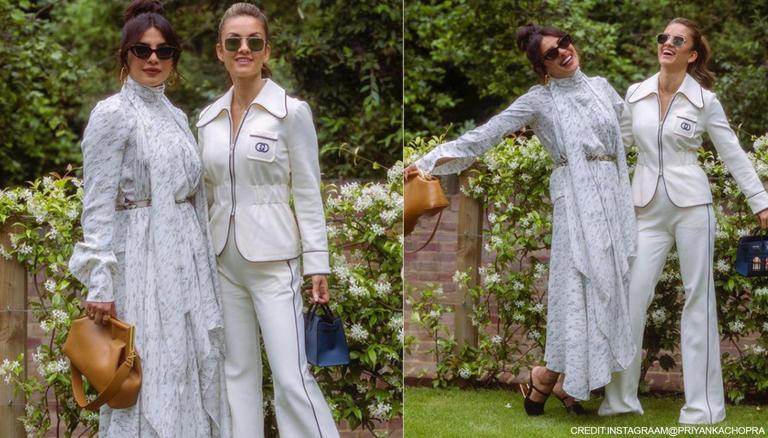 
Businesswoman Natasha Poonawalla was recently spotted enjoying the men’s final at Wimbledon 2021 with global sensation Priyanka Chopra. Dressed in a gorgeous white Gucci ensemble, her Hermes Birkin Faubourg bag caught the attention of her fans. According to Sotheby, the original cost of the bag was around US Dollar 110,000 - 130,000, which is approximately Rs 82-94 Lakhs. It may be a smaller bag as compared to its other Birkin counterparts but the meticulously made facade makes it super exclusive.

Natasha Poonawalla's luxury handbag  at Wimbledon is worth lakhs

The website further stated that “The body is masterfully crafted of Deep Blue Madame calfskin; the front flap, handles, and strap are of Bleu Marine matte alligator; the awnings, tired and “shopping bag” style clochette are of Orange H swift leather; the trim is of Bleu Indigo Sombrero; the window panes are of Craie epsom leather and the base is of Bleu Obsure Sombrero leather. The Hermes website includes a lucid description of the bag, stating: “The Birkin Faubourg carries the spirit of Hermès with it, using precious, grained and smooth leathers and including metal parts, from the swivel clasp to the hasps and the side straps… The quintessence of Paris is now within reach.”

Priyanka Chopra, on the other hand, was spotted in a white Fendi midi dress. She too was seen carrying a tan-coloured bag. Natasha specifically leaves no stone unturned to pair them all up together and even add her huge glitzy solitaires to complete her look. Over the weekend, photographs of Priyanka Chopra watching the match went viral. Apart from Natasha and Priyanka, the match was also attended by Kate Middleton, Prince William, former Wimbledon champions Billie Jean King and Martina Navratilova, actors Tom Cruise and Hayley Atwell.