Host Andy Cohen recently celebrated the 15th anniversary of his Real Housewives Franchise. While doing so Cohen shared a throwback photo of himself. See

Host Andy Cohen recently celebrated the 15th anniversary of his Real Housewives Franchise on Sunday, March 21. He marked the occasion by sharing a throwback photo of himself which was clicked during the early days of producing the show. The first season of the Bravo reality show titled Real Housewives of Orange County premiered back in the year 2006.

Now, achieving the milestone has certainly made the 52-year-old host nostalgic. He joked how the show has turned his hair entirely grey in the Instagram caption which he penned to commemorate the success of the show. In the post shared by him, Cohen reflected on the culture-shifting show which made him nostalgic.

Andy Cohen shared an old photo of himself which features him sitting inside a New York City Office. While working on his laptop, the host enjoys the view of the picturesque skyline, when the picture was clicked. Check out the post shared by him below:

#RHOC premiered 15 years ago today. When I posed for this picture a week later, I had no idea the series would change the course of pop culture - and my life - forever. Thanks to each and every Real Housewife, and the incredible production teams from Evolution, Shed Media, Truly Original, Sirens, GoodBye Pictures, & Purveyors of Pop for keeping the series humming! (SIDENOTE: I’m not saying the Housewives turned my hair entirely Grey, but they did)

Several Real Housewives cast members including Real Housewives of Beverly Hills star Lisa Rinna and Real Housewives of New Jersey’s Caroline Manzo flooded the anniversary post with sweet comments. Even netizens were left emotional when Cohen traced down the journey of the show. A user wrote, “Thank YOU Andy! You’ve made our lives so much more entertaining!!”. Here’s taking a quick look at how fans have reacted to the post: 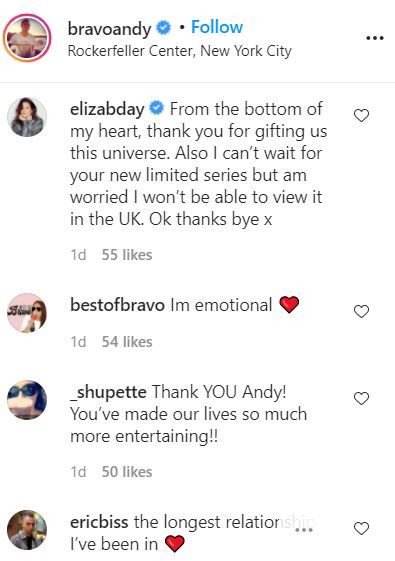 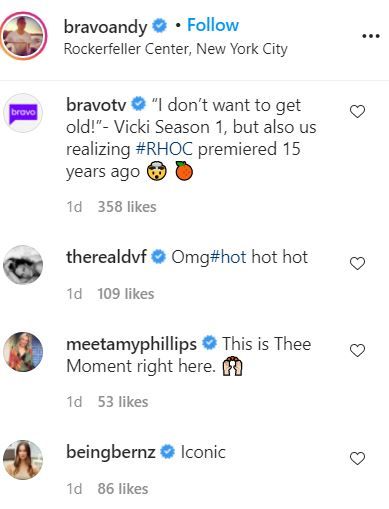 The Real Housewives is an American media franchise that consists of several spin-off reality TV series under its belt. The show documents the lives of several affluent housewives residing in vivid regions. It showcases how the selected women socially interact with others in their community while balancing their personal life.