Ariana Grande Writes ‘I Love You Lady Gaga’ In Her Instagram Story; Here's Why

Ariana Grande says, ‘I love you Lady Gaga’ in her recent Instagram story as the latter asks fans and followers to vote for their song Rain On Me.


Ariana Grande took to her Instagram story on April 7, 2021, to share the number of awards that she has been nominated for as the iHeart Radio Awards nominations were announced. The singer showered love on Lady Gaga as the latter asked fans to vote for their collaboration song Rain On Me. Scroll down to take a look at Ariana’s Instagram story and what she had to say.

Ariana Grande and Lady Gaga collaborated on the song Rain On Me which released last year on May 22. The song was a part of Lady Gaga’s sixth studio album Chromatica and had lyrics written by a list of people including Lady Gaga, Grande, Nija Charles, Rami Yacoub, Tchami, Boys Noize and the producers of the album BloodPop and Burns.

The song has been nominated at the iHeartRadio Music Award, for Dance Song of the Year, Best Music Video as well as the Favorite Music Video Choreography. Lady Gaga took to her Instagram story to share the news of the nominations and asked fans and followers to vote for the song and make it win for the respective categories. She wrote in her story, “Thanks @iheartradio” and tagged Ariana Grande.

The latter reshared this on her Instagram story thanking the platform, as well as sending love for Gaga. She wrote under it, “I love u @ladygaga thank u @iheartradio!!!!”. Take a look at Ariana’s Instagram story here. 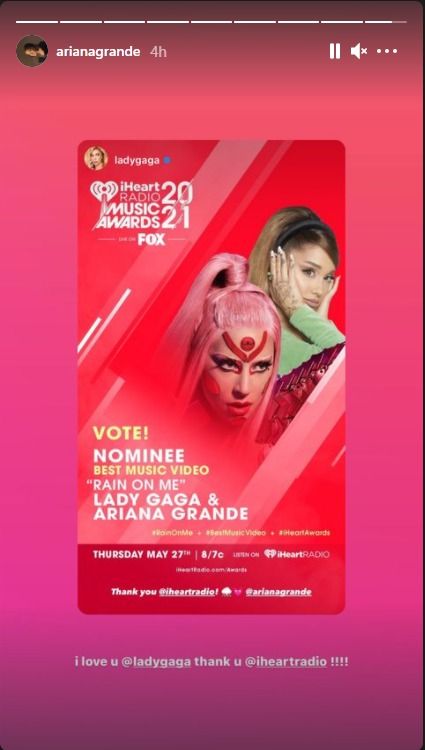 More about Rain On Me

It is an upbeat house, dance-pop and disco song, which Lady Gaga describes as a "celebration of tears". It talks about the difficulties in life and people can defy them with resilience. The song debuted on top of the US Billboard Hot 100 charts, marking the fifth and the fourth single of Gaga and Ariana, respectively to be number one single in the country. Rain Over Me was also the first female collaboration to debut on top of the list and made Ariana Grande the first artist to have four songs that debuted at the leading spot. It was also the seventh most-streamed song of 2020 on the global music platform Spotify.