'Bad Teacher' Cast: All About The Actors And Their Characters In The 2011 Film

The Bad Teacher cast features Cameron Diaz in the lead role of Elizabeth. She is a lazy teacher who tries to impress her co-worker. Know the entire cast here. 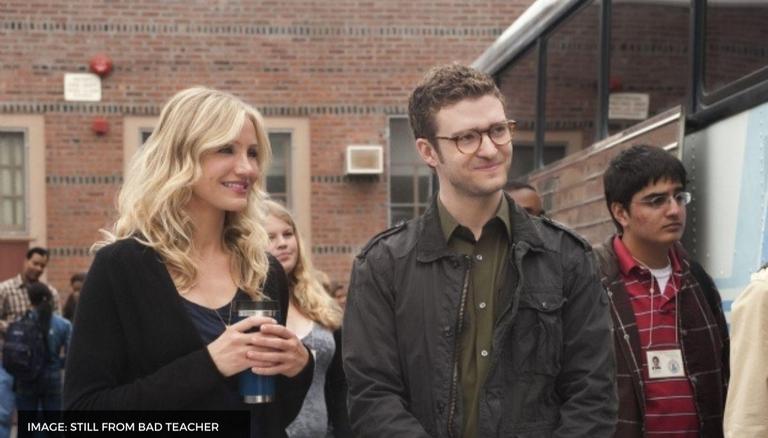 
Bad Teacher is a 2011 comedy film directed by Jake Kasdan and written by Lee Eisenberg and Gene Stupnitsky. The film revolves around a middle school teacher who hates her job, her students and her co-workers. However, she is forced to do it to earn enough money to get her breast implants after her rich boyfriend leaves her. Here's the cast of Bad Teacher and other details about them.

A look at the cast of Bad Teacher

The Bad Teacher cast features Cameron Diaz in the lead role. She is seen portraying the role of Elizabeth Halsey. Elizabeth is a lazy teacher, a gold-digger and is suffering from drug abuse. She is all set to leave her job and get married to a rich man. However, he dumps her when his mother shows him how she is behind his money and does not love him. She plans to get herself a breast implant and is motivated to work towards it. Cameron is popularly known for her role in films like The Mask, Gangs of New York and The Holiday.

READ | 'Hellfighters' cast: Details about the cast of this 1968 film and the role they played

The Bad Teacher cast also stars Justin Timberlake in a pivotal role. He is seen portraying the role of Scott Delacorte. Scott is a wealthy substitute teacher whom Elizabeth likes. However, he is interested in Amy and thus Elizabeth plans to get breast implants to impress him. Justin was also seen in films like Friends with Benefits, Trouble with the Curve and Shrek the Third. He is also known for his songs like Rock Your Body and What Goes Around... Comes Around.

Lucy Punch plays Amy Squirrel. Amy hates Elizabeth and wants her fired and arrested. She is also interested in Scott and persuades him. She tries to put Elizabeth in trouble most of the times. Lucy was also seen in Are You Ready For Love?, You Will Meet a Tall Dark Stranger and Into the Woods.

READ | 'Murder On The Orient Express' cast: Kenneth Branagh's Poirot and other characters

The Bad Teacher cast features John Michael Higgins as the Principal of the school Wally Snur. John is popular for his work in films like Shimmer Lake, Pitch Perfect 2 and Status Update.

Jason Segal is seen playing the role of Russell Gettis. Russel is the gym teacher at school who is attracted to Elizabeth. He persuades her but rejects her several times until she realises that they have a lot of things in common. Jason was also seen in Friends with Benefits, The Five-Year Engagement, The End of the Tour and The Discovery.