Bear Grylls Birthday: From Rajinikanth To Julia Roberts, Top 5 Episodes Of 'Into The Wild'

On the occasion of Bear Grylls birthday, here are top 5 episodes from his adventure series on National Geography channel featuring Rajinikanth. 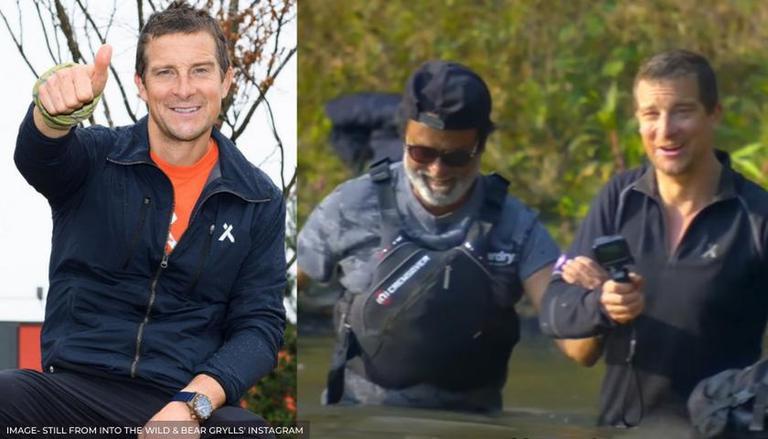 IMAGE- STILL FROM INTO THE WILD & BEAR GRYLLS' INSTAGRAM


British adventurer and star of Man vs. Wild, Bear Grylls celebrates his birthday on 7th of June. A real-life hero for the young generation, the adventurer entertained the audience with his daredevil and life-threatening real stunts in the wild. Bear Grylls age being 47-year-old has not stopped the actor from continuing his dauntless quests.

One of the most prominent figures of Indian cinema went along with the British adventurer on a fun escapade in Bandipur Tiger Reserve in Karnataka. Watching Bear Grylls with Rajinikanth was a treat for many fans in India as they got to watch the Bollywood icon on the small screen for the first time. The theme of the episode revolved around raising awareness on water conservation. Also, throughout the 40 minutes episode, the veteran actor reminisced on his journey in his career and had a candid conversation.

One of the most exciting Into the Wild with Bear Grylls episodes for the Indian audiences was, undoubtedly, the one featuring the Prime Minister of India Narendra Modi. Aired in the year 2019, the episode went on to break several records as it amassed over 3.6 million record impressions. Bear Grylls also shared a picture of the duo enjoying tea together which had quickly gone viral on social media.

Adding to the list of world leaders 'running wild' with Bear Grylls, former American president Barack Obama impressed people around the world with his athleticism in the episode. Trekking through their way in Alaska, the former president also ate a half-eaten salmon left by a bear at the river bank. However, talking about the episode in the Jonathan Ross show, Bear Grylls revealed that he went 'soft' on Barack Obama in the series.

Navigating their way through Kenya’s terrain, 500 days of Summer star Joseph Gordon‑Levitt accompanied the British adventurer in an episode on the show. Bear Grylls took to his social media to share several fun snippets from the episode. In the adventure-filled episode, the duo can be seen fighting against crocodiles and milking camel to save themselves from dehydration.

Pretty Woman star Julia Roberts joined Bear Grylls in Kenya to fulfill the noble task of visiting a remote village deep in the forests and deserts to deliver vaccines for the kids. Popular for her movies like Notting Hill and Erin Brockovich, the actress showed great zeal and enthusiasm in the episode which impressed her fans. The duo can be seen navigating their way through the harsh landscape of desert, canyons, and rivers in Kenya.

IMAGE- STILL FROM INTO THE WILD & BEAR GRYLLS' INSTAGRAM