Bradley Cooper and Matt Bomer were recently spotted kissing each other on the sets of the highly-awaited American biopic titled Maestro. See the picture. 
Maestro, directed by Bradley Cooper, is the upcoming American biopic based on the life of the notable American musician,  Leonard Bernstein. As the fans await the release of Bradley Cooper-starrer Maestro, a set of pictures from the set recently surfaced online and created a buzz on the internet. A series of photos from the sets of Maestro was shared online, one of which included a glimpse of Bradley Cooper kissing Matt Bomer while filming a scene.

Ahead of the release of the film, Netflix earlier dropped Bradley Cooper's first look as Bernstein and received fans' love. While the fans were amazed to see his unrecognisable look from the movie, another set of pictures recently surfaced online and took the internet by storm.

The photos depicted Bradley Cooper sporting a beige trench coat, a white shirt and black trousers while Matt Bomer donned a grey jacket with a red and blue tie. The photos also depicted how the duo were dressed as their movie characters while performing a scene in which they had to kiss each other. 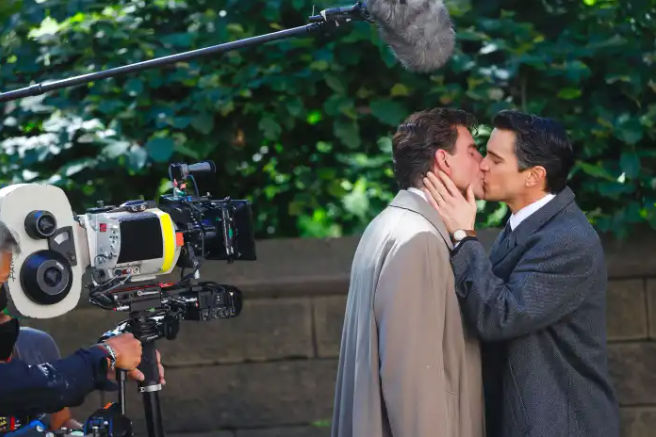 The movie is set to follow the life of legendary Broadway composer Leonard Bernstein and will show various stages of his life. As Cooper is stepping into the shoes of the late Grammy-winner, he is leaving no stone unturned in recreating the former's look. The Over-the-Top (OTT) medium giant recently dropped the actor's first look as Bernstein and fans are loving it. The film was in its pre-production stage last December. As the makers are currently in the process of filming, the movie is expected to come out next year, in 2023.

It was recently revealed that American actor and comedian, Sarah Silverman, who is known for addressing topics about social taboo through her comedy, has been added to the cast of Bradley Cooper's directorial, Maestro.

While Silverman will play the role of Shirley Bernstein, other cast members of the film will include Bradley Cooper as Leonard Bernstein, Carey Mulligan as Felicia Montealegre, Jeremy Strong as John Gruen, Maya Hawke as Jamie Bernstein, Matt Bomer among others.