'Bridgerton' Renewed For Season 3 And 4 By Netflix, Season 2 Already In Production

'Bridgerton' makers have confirmed that the series will get 3rd & 4th installment on Netflix. The news comes as the production on 2nd season starts. Know more.


Bridgerton has become one of the most popular period drama series on Netflix. With a successful first season, the makers renewed it for a second outing. Now, it has been announced that the upcoming part will be followed by two more installments on the streaming platform.

Bridgerton season 3 and 4 confirmed by Netflix

Netflix has announced that their new original series Bridgerton will be getting a third and fourth season. Created by Chris Van Dusen, it is based on Julia Quinn’s novels of the same name and is set in London during the competitive world of Regency-era when debutantes are presented at court. The news was revealed through Lady Whistledown’s Society Papers. 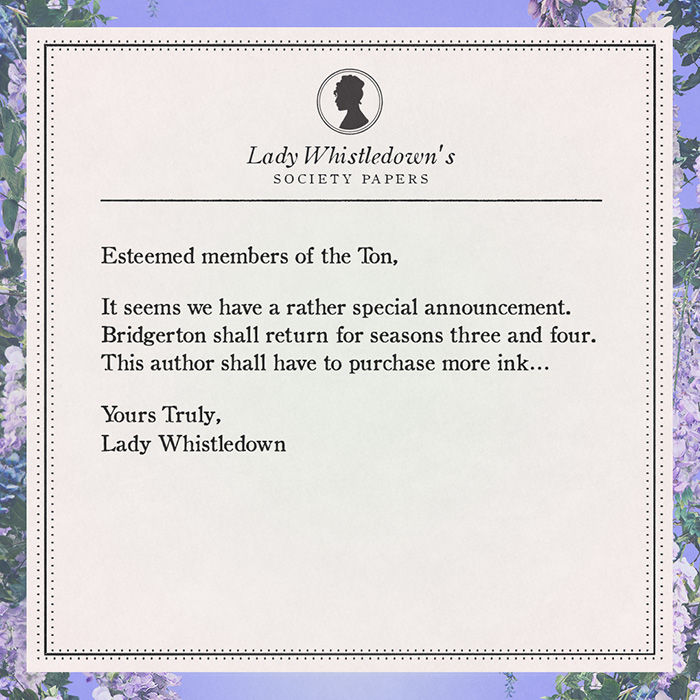 Producer Shonda Rhimes told About Netflix.com that from the first time she read Julia Quinn’s “delicious” Bridgerton series, she knew these were stories that would captivate a viewing audience. But the evolution of this adaptation would not be a success without the many significant contributions of the entire Shondaland team. She stated that this two-season pickup is a strong vote of confidence in their work and she feels “incredibly grateful” to have partners as collaborative and creative as Netflix. Rhimes asserted that she and executive producer Betsy Beers are thrilled to have the opportunity to continue bringing the world of Bridgerton to a worldwide audience.

Set in the sexy, lavish, and competitive world of Regency London high society. From the glittering ballrooms of Mayfair to the aristocratic palaces of Park Lane and beyond, the series unveils a seductive, sumptuous world replete with intricate rules and dramatic power struggles, where no one is truly ever on steady ground. At the heart of the show is the powerful Bridgerton family. Comprised of eight close-knit siblings, this funny, witty, daring, and clever group must navigate the upper ten thousand’s marriage mart in search of romance, adventure, and love.

Bridgerton season 2 will show Lord Anthony Brigderton’s quest for love. Sadly, for fans, season 1 fame Rege-Jean Page would not return as Simon Bassett, the Duke of Hastings. However, Phoebe Dynevor will reprise Daphne as a devoted wife and sister, helping her brother to find a Viscountess. The second season is currently in production.

Bridgerton season 3 and 4 are likely to follow the novels. There is no news on when it will arrive on Netflix or cast members. However, the series has now become a top property for the streamer.