Cardi B & Penn Badgley Bond Over Twitter Exchange; Rapper Pitches Herself Role In 'You'

Cardi B and 'You' star, Penn Badgley recently developed a friendship over the internet. Now the rapper wishes to star in the psychological thriller, read more. 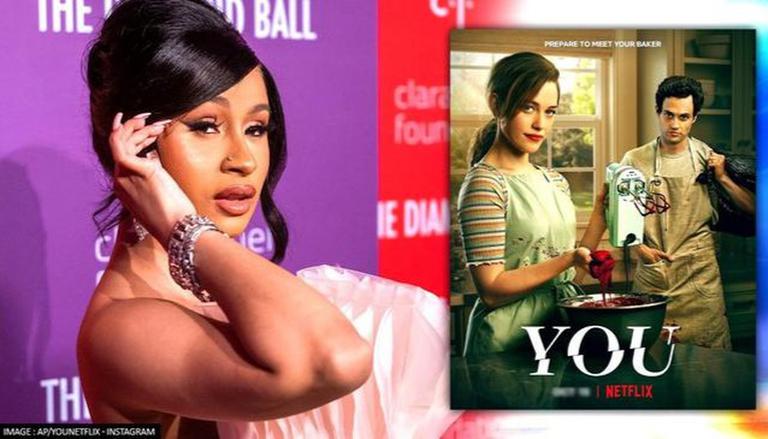 
Cardi B and You star, Penn Badgley recently developed a friendship over the internet. The rapper has now pitched herself a role in the next season of the psychological thriller series. The official Twitter handle has also changed its display picture to an image of Cardi B.

Cardi B casts herself in season 4 of 'You'

Cardi B is clearly a fan of Penn Badgley and his most - recent release, You. She took to Twitter and cast herself in the first episode of the next season and mentioned what role she would like to take on. In the episode, she imagined the scene would take place at Paris Fashion Week and also added a dialogue that sounds similar to Joe Goldberg's from the show. She wrote, "So .it's episode 1 and I'm at Paris Fashion week shutting it down! I turn around and there stands YOU." The rapper also changed her display picture to Penn Badgley's on-screen character and fans wondered what was amiss.

So it’s episode 1 and I’m at Paris Fashion week shutting it down! I turn around and there stands YOU

Ok finish it off @netflix 😌 pic.twitter.com/Y0TEKwlPbQ

Netflix was quick to respond to the rapper and used lyrics from her very own song so do so. They wrote, "Tie me up like I'm surprised" as they accompanied the lyric with an image of Joe tried up. They also referenced another line from her song and wrote, "Let's role-play, I wear a disguise" and posted a picture of Joe in a chef's hat.

Penn Badgley praises Cardi B for her hands-on attitude

It all began during a promotional event when Badgley praised Cardi B's hands-on attitude and revealed that he is nothing like her. Following this, a Cardi B fan account posted a clip of the actor, who was seen speaking at Netflix’s 'In Conversation with YOU' event. In the interview shared by a fan page, Penn appreciated Cardi B’s unique approach to social media. The actor said, “I really appreciate people who have this totally second-nature relationship to it, because that's when you have something meaningful and substantive to post, then I think it really comes through and people appreciate it all the more. Cardi B is a great example of that. She has such an authentic relationship.”

Badgley continued, "To me, it's this incredibly nuanced place to be, and despite what many might judge as antics, I feel she has an incredibly authentic relationship to that, and I think that's why people like her so much" The rapper was over the moon and tweeted, "OOOOMMFFFGGGGGG HE KNOWS ME !!!OMMMGGGG!!!!!! Yoooo like I'm famous famous".

READ | Cardi B on why she stopped talking about politics: 'Tired of getting bashed'
READ | ‘Squid Game’: Billie Eilish, Cardi B and other celebrities who loved K-drama
READ | Cardi B fangirls over 'You' star Penn Badgley; says 'he knows me, i'm like famous'

WE RECOMMEND
Cardi B fangirls over 'You' star Penn Badgley; says 'he knows me, i'm like famous'
‘Squid Game’: Billie Eilish, Cardi B and other celebrities who loved K-drama
Cardi B on why she stopped talking about politics: 'Tired of getting bashed'
'You' showrunner says Joe will have many 'holes in his heart to fill' in season 4
Cardi B flaunts mansion she received as gift from husband Offset for her b'day; See pics
Listen to the latest songs, only on JioSaavn.com