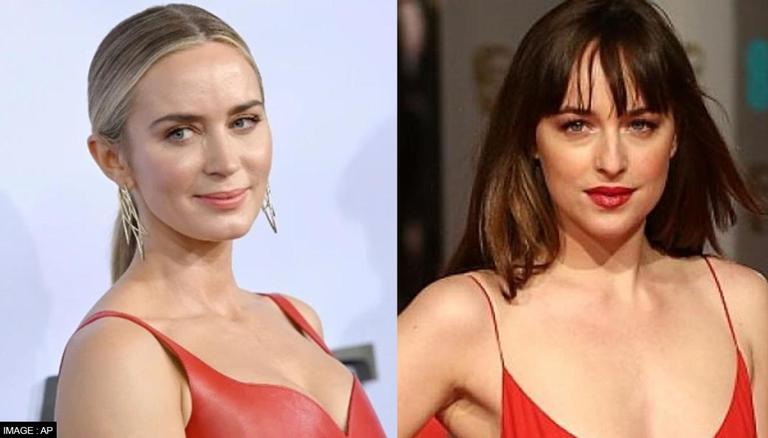 The 32-year-old actor explained that initially she could not talk to anybody about it and nobody in her family knew about it. She recalled speaking to Blunt and she advised her to 'do it if it feels right' and 'always do what you want to do.'

The film revolves around Johnson's character Anastasia as a college graduate who develops a relationship with a young business tycoon named Christian Grey (played by Jamie Dornan). While Christian looks like a perfect and charming man on the outside, the trilogy depicts his dark past and fixation on sadomasochistic relationships. Johnson was confirmed for the role which was also offered to Lucy Hale, Elizabeth Olsen, Alicia Vikander, Felicity Jones, and Shailene Woodley. Several others who were also approached for the role were Emma Watson and Emilia Clarke.

Emily Blunt, who is known for her diverse acting roles, has worked with Johnson in the 2012's rom-com, The Five-Year Engagement. Even though Johnson had a minor role, the two actors bonded quite well on the set. Blunt also has another Fifty Shades connection as she starred with Dornan in the Irish rom-com, Wild Mountain Thyme in the year 2020.

Meanwhile, for the unversed, Johnson is set to appear in the highly-anticipated, The Lost Daughter. The film is a psychological drama penned and helmed by Maggie Gyllenhaal. It is slated for a theatrical release on December 17 and on the online streaming giant, Netflix on December 31.