Dave Bautista is recently seen in Army of the Dead on Netflix. The actor discloses the thing that brothers him while watching the Zack Snyder film. Read to know 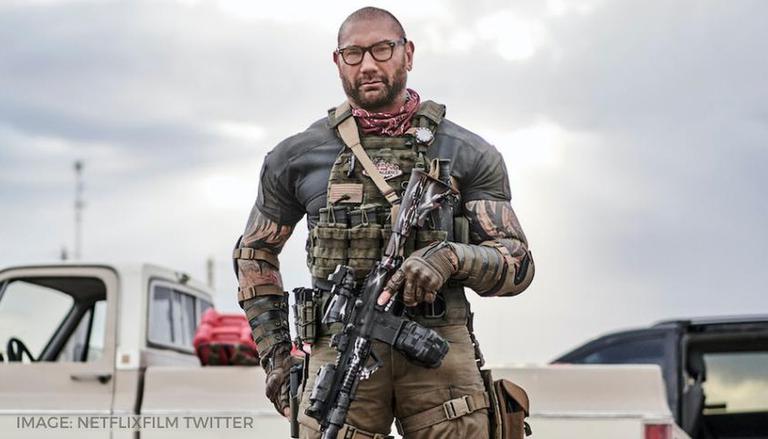 
Army of the Dead cast has Dave Bautista playing the pivotal character of Scott Ward. Directed by Zack Snyder, the zombie heist film has earned mostly positive responses on Netflix. However, there is one thing that bothered Bautista as he watched the movie recently.

What really bothers Dave Bautista while watching Army of the Dead?

In a recent interview with Vulture, Dave Bautista revealed that what really bothers him, when he watches Army of the Dead is that he doesn't know his co-star, Tig Notaro. The actor who plays Marianne Peters, a helicopter pilot, was a replacement for Chris D'Elia, following accusations on him of sexually harassing underage girls. She was digitally added to the movie without actually shooting scenes with other stars. Bautista stated that he feels like he should know her.

He noted that he wants to meet Notaro, and wants to hug her and tell her how amazing she was in the film. He mentioned that has been able to do that with all his other co-stars and hasn't been able to do it with Tig because he hasn't met her yet. The wrestler-turned-actor thinks that she is "amazing and is incredible" in the movie.

Dave Bautista revealed how he feels while watching him beside Tig Notaro in Army of the Dead, while they didn't shoot a single scene together in reality. He asserted that it was weird, because, he wasn't there. And when he watches it, he feels like he was there. The actor noted that there is a connection that's missing there. But he doesn't feel like the movie misses a beat. Bautista added that anybody who doesn't know that's the case won't pick up on it at all. 'Tig fits right in, and her chemistry fits right in', he noted.

READ | Who did Tig Notaro replace in 'Army of the Dead'? Check out the reasons for replacement

Army of the Dead cast includes Ella Purnell, Ana de la Reguera, Garret Dillahunt, Raul Castillo, Garret Dillahunt, Omari Hardwick, Hiroyuki Sanada, Matthias Schweighöfer, and others. The screenplay is by Zack Snyder, Shay Hatten, and Joby Harold, from a story by Snyder. It shows a group of soldiers hired to get $200 million from a vault in Las Vegas, the place which is now surrounded by the zombies. What is supposed to be a simple in and out mission turns out into a killing spree when things go south. Army of the Dead ending has hinted at a sequel, but there is no official confirmation yet.