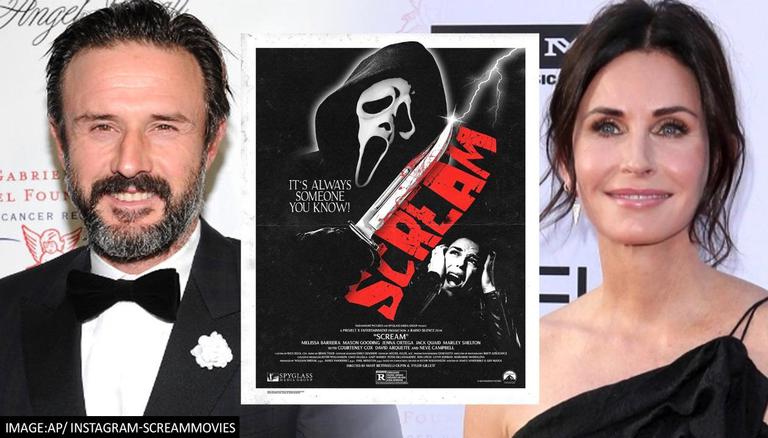 
Actor David Arquette and Courteney Cox are always in the headlines, sometimes due to their bitter-sweet relationship and sometimes due to their ongoing projects. As the cult-classic slasher series' recent instalment Scream 5 is releasing today on the big screens, it marks the reunion of David and Courteney Cox once again. Recently, the Ready to Rumble actor went down memory lane and reminisced some of his earlier memories with ex-wife Courteney Cox from the sets of Scream.

David talks about his role as a local sheriff, Dewey Riley and also revealed how the movie's director Wes Craven influenced him. In an interview with People, Arquette has revealed that Craven was the one who encouraged him to date his co-star and wife, Courteney Cox. He also revealed how his words shaped his thoughts and made him approach Courteney. Talking about it, he says-

“Wes had a real impact. [He was] like, ‘David, you know she likes you and you should really get your stuff together.’ He gave me a real man-to-man talk and that had an impact on the course of my life.”

Arquette also recollected about meeting Cox for the first time, at that point she was an established actor and was already famous for her role as Monica from the show Friends and the Scream actor revealed that he was always her fan.

Courteney Cox and David Arquette fell for each other on the sets of Scream and from reel life couple the duo turned into a real-life couple. They were married to each other for more than a decade between the late 90s and mid-2000s, while simultaneously playing love interests throughout the Scream franchise. The couple welcomed their daughter Coco in June 2004 and announced their divorce six months later, six months before the release of the third Scream sequel. The duo Arquette and Cox parted their ways in the year 2013. Despite their differences, Cox and Arquette still remain close and co-parent their daughter Coco.

For those unversed, David Arquette is presently married to producer Christina McLarty since 2015, and the couple has two children.

WE RECOMMEND
'Scream': Courteney Cox & co honour Wes Craven as franchise marks 25 years; WATCH
Is 'Scream 5' available for OTT online streaming on HBO Max, Netflix or Paramount Plus?
Courteney Cox reveals similarities she shares with her on-screen character Monica
David Arquette in FRIENDS - Did you notice Courtney Cox's ex-husband's cameo in the show?
'Scream 5' release date and time: When is the horror movie releasing in India, US and UK?
Listen to the latest songs, only on JioSaavn.com