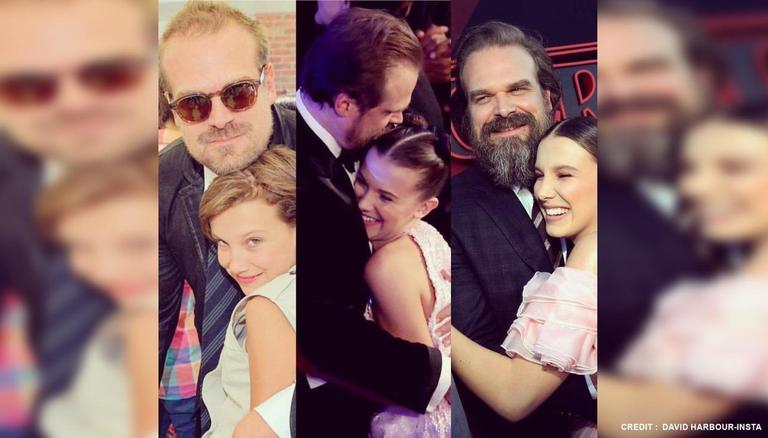 
David Harbour recently opened up about his real-life equation with his co-star Millie Bobby Brown. The duo plays Police Chief Hopper and Eleven on the popular sci-fi show Stranger Things. Harbour in a recent podcast said that he has a fatherly bond with the young actor.

David Harbour on his real-life equation with Millie Bobby Brown

In a podcast of That Scene With Dan Patrick, David Harbour said, "Millie and I have always had sort of a special relationship because I knew her when she was so young, I knew her before any of this big fame hit." Millie was just 12 years when she shot to fame for her portrayal of Eleven. Harbour continued and added that he constantly worried for her as she had to deal with such fame at a young age. "I've just always felt this kind of deep fatherly affection for her" said David.

Meanwhile, Harbour also dropped hints about his character Chief Hopper who was in a Russian prison camp and that it was a return to "The warrior realm because there's something as you get to be the dad role where, you know, it's a bit like the dad gene." Stranger Things season 4 will soon be releasing on Netflix, the date of the release has not been announced yet. Producer Shawn Levy in an interview with Variety said that the season 4 of the show was much more ambitious than the preceding three seasons.

Meanwhile, David Harbour was recently seen next in  Marvel Cinematic Universe's superhero movie Black Widow. The movie will feature Scarlett Johansson reprising her role as Natasha Romanoff / Black Widow. David will be playing the role of Alexei Shostakov / Red Guardian who is the Russian super-soldier counterpart to Captain America and a father-figure to Romanoff and Belova. The movie will also feature Florence Pugh, O-T Fagbenle, William Hurt, Ray Winstone, and Rachel Weisz. David Harbour's next project is an adult animated comedy series for Netflix titled Q-Force. This series is about a group of undervalued LGBT superspies and is centred on a gay secret agent who is like James Bond. Harbour will voice the character of Agent Rick Buck.

READ | 'Black Widow' star David Harbour reveals what he wants next for the Red Guardian
READ | Netflix's 'We Have a Ghost': Anthony Mackie, David Harbour to share screen together
READ | 'Stranger Things' actor David Harbour says his role helped him prepare for fatherhood

WE RECOMMEND
Love is in the air: Binge-watch the 5 most romantic movies and shows on Netflix
'Stranger Things' actor David Harbour says his role helped him prepare for fatherhood
'Outer Banks' 2 hits Netflix with twists galore, but is a third season on the anvil too?
Netflix lost almost half a million users! Check out the reason behind this steady decline
Is Christopher Nolan directing film for Netflix? OTT chief addresses rumours; read