On Anwar Hadid's birthday, his GF Dua Lipa took to her social media page to pen a loving note for him. In the note, she shared that she is lucky to have him.


American model and Gigi and Bella Hadid's younger brother Anwar Hadid rang in his 22nd birthday on Tuesday, June 22. His girlfriend and American popstar Dua Lipa marked the occasion and made Anwar Hadid's birthday extra special by sharing a series of pictures of the duo on her social media page.

Taking to Instagram, Dua Lipa celebrated beau Anwar Hadid's birthday by sharing multiple photos, giving the public a glimpse into their relationship that they have managed to keep private and away from prying eyes. Sharing the pictures on social media, Dua wrote, "Happy Birthday Baby. another lap around the sun ~ you make my world so much better!! I’m lucky to love you and be loved by you. DEXTER IS SO LUCKY TOO N LOVES U SO MUCH!!! can’t wait to celebrate youuuu today." She also referenced Anwar's furry friend Dexter in the caption. Take a look at the pictures shared on Dua Lipa's Instagram below.

Netizens are all hearts for Dua Lipa's birthday wish for Anwar

Dua and Anwar's fans were quick to shower the couple with love and compliments and called them words like "Best Couple" and "King and Queen" while also wishing Anwar a happy birthday. Hollywood celebs also took to the comments section of the post to drop birthday wishes for the model. Sarah Hudson wrote, "HAPPY BIRTHDAY SWEET BROTHER ANGEL OF THE VIOLET FLAME! I LOVE YOU!" while songstress Kylie Minogue commented, "Toooooo cuuuuuuute." Many celebs also dropped heart emojis in the comments. Take a look. 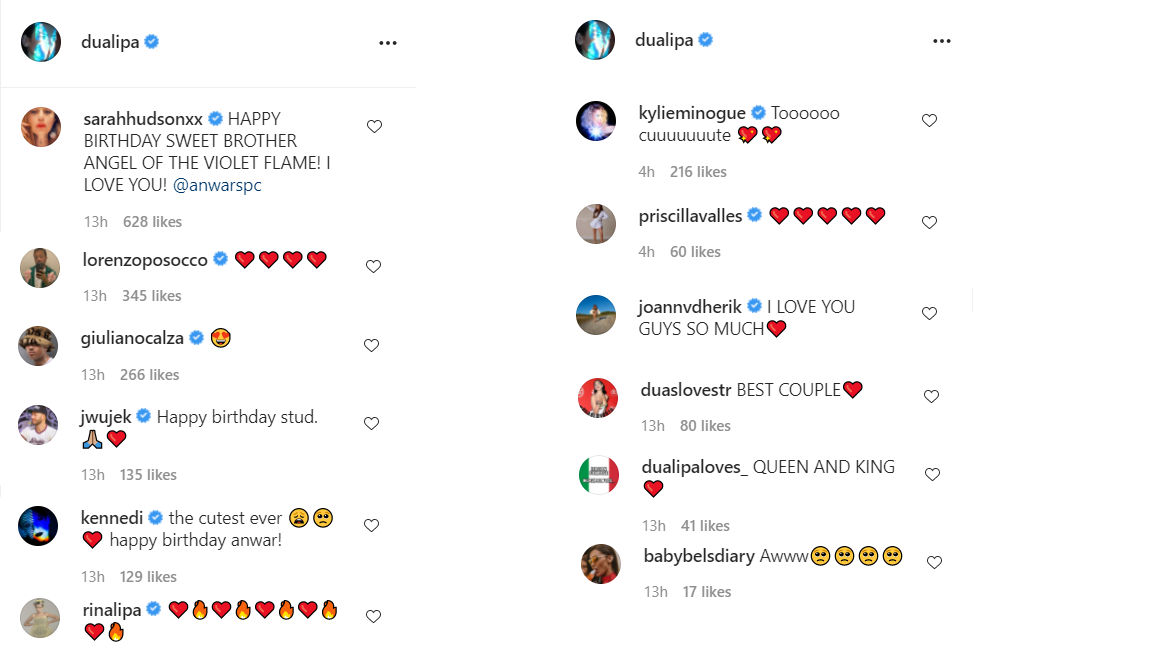 A look at Dua Lipa and Anwar Hadid's relationship

News of Dua Lipa and Anwar Hadid dating first broke out in 2019 and the couple made their relationship official to the public in the same year in the month of November by walking the red carpet together at the  American Music Awards. In May 2020, in an interview with Watch What Happens Live, the 25-year-old singer confessed that they had initially met at a barbecue and she eventually slid into his DMs before they started dating.

The duo has been dating for nearly two years now but has decided to keep their relationship private when it comes to social media. In a recent interview with British Vogue, the New Rules singer revealed that they have chosen to do so as she just wants to be happy in her relationship without having other people's opinion.

READ | iHeart Radio Music Awards 2021: From The Weeknd to Dua Lipa, here's a list of winners

On the work front, in February 2021, Dua released Future Nostalgia: The Moonlight Edition which is a reissue of her second studio album, Future Nostalgia. The official music video of her song Love Again which is a part of her album released on June 4. The song has crossed over 31 million views on YouTube to date.

WE RECOMMEND
Dua Lipa's latest album to be 'something completely different' says label rep
Dua Lipa reveals why her relationship with Anwar Hadid is 'quite private'
Ariana Grande & Dalton Gomez' wedding pics out; Celebs & fans are all hearts for duo
Dua Lipa's 'Angel Boy' Anwar Hadid celebrates her Grammy 2021 win with special surprise
Dua Lipa says, 'We're in this together', as she shares a warm Christmas message for fans