Halle Berry is currently over the moon after the release of her directorial debut, 'Bruised'. Here's how she trained to play the role of an MMA fighter. 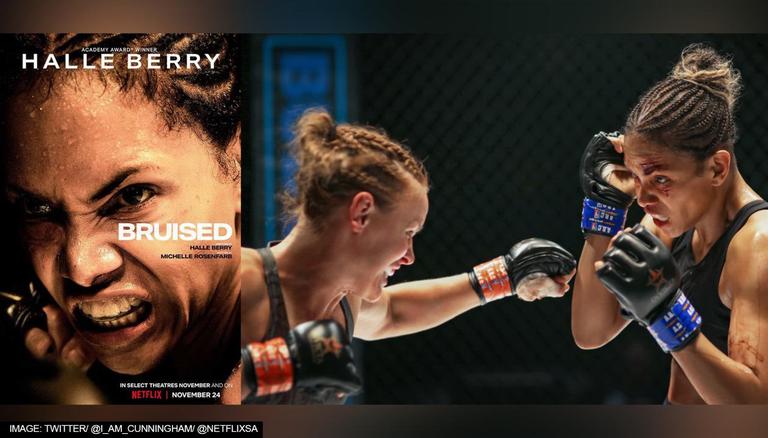 
Halle Berry is currently over the moon after the release of her directorial debut, Bruised, in which she stepped into the shoes of an MMA fighter, Jackie Justice. The actor's longtime friend and trainer Peter Lee Thomas recently spoke to Entertainment Weekly and opened up about Halle Berry's rigorous workout routine. He also revealed that she shot parts of the film with a few cracked ribs.

Peter Lee Thomas mentioned that the actor's day began at 7.45 am with conditioning sessions, which lasted two hours. It was after this that she went into combat prep and mobility training. He also mentioned that when he was feeling 'mischievous', he would push Berry until she would 'beg for mercy' via a 500-rep challenge that consisted of squats, pull-ups, knee raises and much more. He stated that he trained her intensely since she would be going head-to-head with Valentina Shevchenko, an MMA professional, on-screen. Peter Lee Thomas also mentioned that the actor cracked two of her ribs during production, so he had to modify her routines, so she could perform without impacting the injured area too much. He also revealed that MMA pro and Berry's co-star Valentina also left the sets of the film with 'some bruises and scratches'.

Thomas also shed light on the star's diet and mentioned that she gravitated towards a fighter-friendly paleo diet anyway. He also mentioned that he asked Halle Berry to study fighters including Cecilia Brækhus and Claressa Shields, so she would be able to connect with her character in a deeper way.

In a recent interview with Hollywood Reporter, the actor-turned-director mentioned that she would train for four to five hours every day and then prepare for the shoot of the film. She shared that looking back to that period of her life, she cannot imagine how she did it all but mentioned that she was 'energized and ignited' by the adrenaline. She also mentioned that she was looking forward to having more opportunities to get behind the lens and tell a story she is passionate about.

WE RECOMMEND
'Bruised' arrives on Netflix; Halle Berry thanks cast and crew for trusting her
Halle Berry reveals Blake Lively was originally meant to play Jackie Justice in 'Bruised'
'Bruised': Halle Berry 'filled with emotion' after premiere of directorial debut
Warriors' Curry sits out against Pistons with bruised hip
Halle Berry on turning director for Netflix's 'Bruised': "Women can be in charge"
Listen to the latest songs, only on JioSaavn.com