After enjoying a family trip in Central California's wine country, actor Kate Hudson was reportedly spotted on Monday in the city of Santa Barbara.

Almost Famous actor Kate Hudson has been having some fun time with her family. After enjoying a family trip to Central California's wine country, the actor was reportedly spotted on Monday in the city of Santa Barbara. Kurt Russell and Goldie Hawn were also spotted along with the celebs on their outing.

According to the Daily Mail, Kate Hudson, her husband Danny Fujikawa, their daughter Rani, and her popular actor-parents Kurt Russell and Goldie Hawn went for a bike ride in sunny Santa Barbara on Monday. In a black tank top and purple leggings, Kate flaunted her sculpted figure. The actor wore a helmet, and her two-year-old daughter, who was also wearing a helmet, rode in an orange infant carrier behind her. Rani Rose donned a blue jacket and pink leggings. Goldie and Kurt made up the rear in equally casual attire.

Earlier, the actor went on a trip in Paso Robles, California, over the weekend and posted some photos and videos on Instagram, giving fans a peek at their laid-back getaway. Kate looked stunning in the first video, sporting no makeup along with black and gold-rimmed shades, as well as a fierce gold cat-eye. Her blonde tresses were also pulled into a high bun and wrapped in a scarf with a matching pattern. As she gave a tour of the grounds, the actor palmed a printed cup as she revealed one of the glamping tipis. In another picture, she also showed off the rustic wooden picnic table topped with a printed tablecloth and candles for their outdoor lunch.

Along with the pictures and video, the actor penned a sweet note revealing details about the same. She wrote, “Moments from one amazing weekend ðŸ’« #familyiseverything #famsallhere (Sending love to our new friends @windwoodranchpaso and the band @shawnclarkfamilyband Both who made this a darn good time â˜ºï¸) #gotthestevietipi”. Take a look at the post below.

Netizens could not stop themselves from flooding the comment section with all things happy and nice. They were going all gaga over the posts and penned messages for the family. One of the users wrote, “Sure does make my heart skip & sing sing sing with a wiggle and jiggle ðŸ’ƒðŸ¥‚ Family is everything. May I just say I'm meant to live in a treehouse or Teepee It's gonna happen”. Another one wrote, “best”. Check out a few comments below. 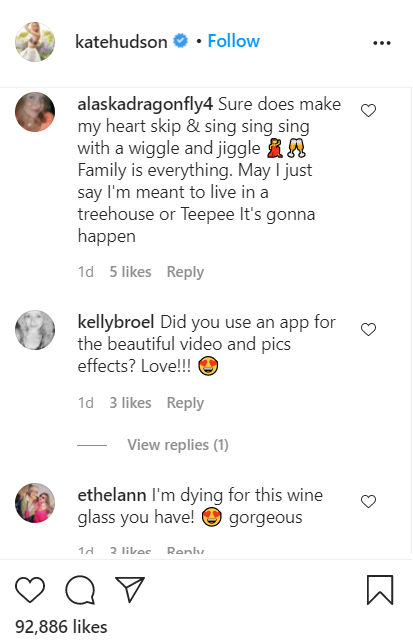