Kourtney Kardashian and Kylie Jenner entered into the month of October by decorating their homes and setting the mood for Halloween in advance. 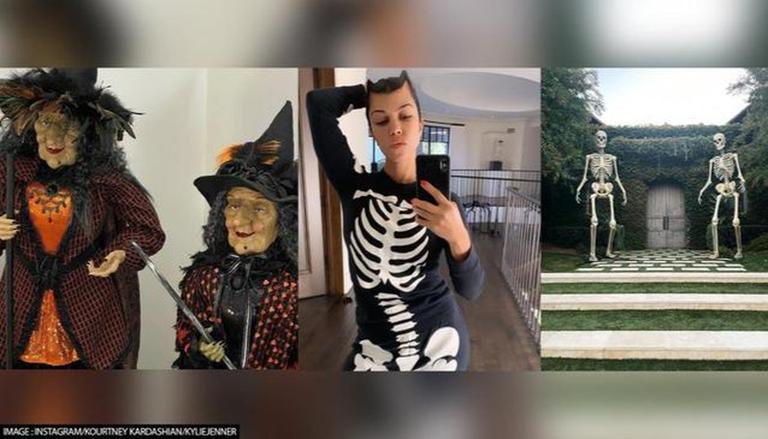 
Kourtney Kardashian and Kylie Jenner entered into the month of October by decorating their homes and setting the mood for Halloween in advance. Kardashian posted a collection of 10 pictures and gave her fans and followers a sneak peek into the decorations and effort she has put into gearing up for Halloween, which is celebrated on October 31. Kylie also gave her followers a glimpse of her home as she flaunted some unique works of art that she decorated her home with.

Kourtney Kardashian and Kylie Jenner all set to celebrate Halloween

The Keeping Up With the Kardashians star's collection of pictures included two huge skeletons standing on both sides of her door and also some pumpkins which were engraved with spooky faces. She also included pictures of the decorations that were on her table, which included the hand of a skeleton, a gold skull, some cotton thrown over to make it look like a spider's web and a paper with the word 'help' written on it. Kourtney also posted a picture of herself in a black and white skeleton outfit, as she captioned the picture, "'Tis the season!"

Kylie Jenner also got into the Halloween spirits as she posted a bunch of pictures from her house. The pictures included a black bowl with multiple small pumpkins in them, a spider made of cloth and some witches too. She also put up a couple of pictures of Halloween-themed cupcakes, which were purple and orange in colour. She also posted a picture of a lighted candle and captioned the collection of pictures, "October >".

Kylie Jenner was recently in the news after she announced her all-new venture, Kylie Baby. She shared a picture of herself with her daughter, Stormi, as she promoted her products. The picture saw Jenner in a stunning blue bodycon dress, while Stormi could be seen on her lap in a bathrobe. The picture seemed like Jenner was promoting her products by applying them to her daughter’s leg. She wrote in the caption, "It was a dream of mine to develop clean, safe, effective, and conscious baby care when I became a mom." She launched her product line on September 28.

READ | Kylie Jenner opens up about motherhood; says she was 'meant to be a mother'
READ | Did Kourtney Kardashian just hint at struggling with psychological trauma? Deets inside
READ | Scott Disick called out by Kourtney Kardashian's ex for trying to diss her relationship