Look at Country singer and mom of one, Maren Morris' summer bikini pictures from her vacation where she shows off her abs in an orange bikini and a body chain!


Maren Morris, the singer, songwriter, and producer recently posted a picture of herself in an orange bikini, and fans could not help but notice her sculpted abs in it! Maren Morris has been vacationing with her husband Ryan Hurd at a beachy location and has the most stunning pictures to share. Recently, Ryan Hurd and Maren Morris also performed their song, Chasing After You live at the 55th Academy of Country Music Awards and it was breathtaking. It looks like the couple is relaxing after the award show appearances!

Can you tell Maren Morris' age from this picture? She does not look 31 years old at all! She paired it with golden jewellery which included a gold body chain that really added a touch of glamour to her bikini! She was also sporting a nose ring and paired her outfit with black sunglasses to finish the look. Take a look at the comments section from Maren Morris' Instagram that went crazy!

READ | Why did Taylor Swift re-record Fearless? Here's all you need to know about the new album 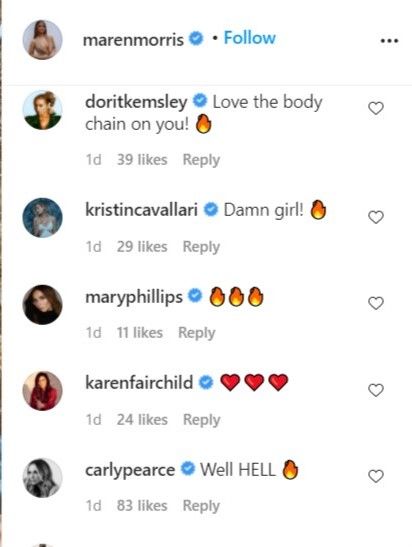 The singer gave birth to her son Hayes Andrew Hurd a year ago and is said to have started working out just two months after her pregnancy! Maren Morris' photos prove that motherhood has not gotten in the way of her fitness at all!

She recently collaborated with Taylor Swift for her album Fearless: Taylor's version which is a re-recording of her Fearless album but with some additional unreleased songs. One of the songs from the vault is 'You All Over Me' and Taylor Swift roped in Maren Morris for the background vocals of the song!

She also performed her hit song 'Bones' with singer John Mayer at the 2021 Grammy's and left the audience speechless. John Mayor's addition was hidden from the guests and was a total surprise when he performed with her. The two singers really complemented each other and delivered a marvelous performance.

Take a look at some other Maren Morris' photos from her beachy vacation:

She seems to be relaxing and taking in the sun! We hope to see her come out with new music soon.