Lighting up the big screens this Diwali, Marvel Studios recently announced the release date of the much-awaited epic action-adventure 'Eternals'. 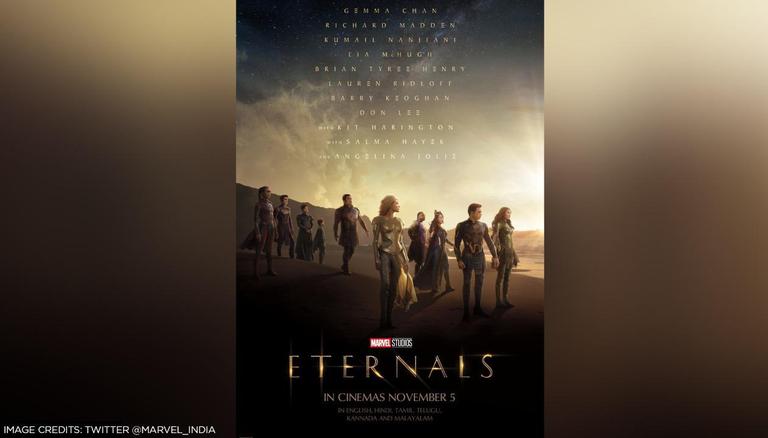 
Lighting up the Big screens this Diwali, Marvel Studios recently announced the release date of the much-awaited epic action-adventure Eternals. The upcoming film is the third film in the MCU’s Phase Four which is scheduled to run theatrically on November 5 in English, Hindi, Tamil, Telugu, Kannada, and Malayalam.

The superhero film helmed by Academy Award winner Chloé Zhao welcomes an exciting new team of superheroes to the Marvel Cinematic Universe. Spanning thousands of years, the epic story features a group of immortal heroes forced out of the shadows to reunite against humanity’s oldest enemy, The Deviants. The official Twitter page of Marvel India shared the good news on the micro-blogging site and wrote, “Lighting up the Big screens this Diwali! Eternals will arrive on November 5 in Cinemas! In English, Hindi, Tamil, Telugu, Kannada, and Malayalam. #YehDiwaliEternalsWaali.”

Lighting up the Big screens this Diwali! Eternals will arrive on November 5 in Cinemas! In English, Hindi, Tamil, Telugu, Kannada and Malayalam#YehDiwaliEternalsWaali pic.twitter.com/co1d5ffJd1

READ | Who is the new villain in Marvel's 'Eternals'? Here's everything we know so far

The final trailer of the film was released on September 2 that gave more information about the purpose of the Eternals, their absence from Avengers: Infinity War and Endgame, and the threat they are facing. The trailer revealed how Thanos erased half of the population from the universe. It also saw Ajak telling Ikaris that the population's return provided the necessary energy for the emergence to commence. At one point Gemma Chan's Sersi says, "We were instructed not to interfere with any human conflict unless Deviants were involved," thereby explaining the absence of these god-like creatures in Avengers: Endgame. Thanks to Salma Hayek aka Ajak, we also know that reversing 'The Snap' caused something called 'The Emergence."

READ | Harish Patel gets mention in official poster of The Eternals with Angelina Jolie, others

WE RECOMMEND
Is Shang-Chi a New Avenger? Here's all about Shang-Chi's future with Marvel Studios
When is LEGO Marvel Super Heroes releasing? Learn more about the 2013 LEGO release
Here’s why Scarlett Johansson and Kevin Feige were against OTT release of ‘Black Widow’
Marvel Studios seeking Latino actor to lead untitled Halloween special for Disney Plus
Marvel Studios unveil the final trailer of Eternals: Reveal why they didn't help Avengers