Paris Jackson Gives Herself A Foot Tattoo Amid Coronavirus Lockdown

Paris Jackson took to her social media on May 13 to share a picture of her tattooing her foot. She created an unolome symbol which represents enlightenment.

With the Coronavirus lockdown in effect, people can no longer visit salons and tattoo parlours. But it seems like Paris Jackson is not letting the virus come in her way of creating her own art. The model created her own foot tattoos during self-isolation. Earlier this week, Jackson took to her social to share a series of photos and videos of her getting tattooed.

Paris Jackson gets inked amid quarantine

In one image, Paris Jackson is seen sitting with her foot up while she inks her little toe with the tattoo needle. She captioned the post using animal paws emojis. The comments section went abuzz as soon as she posted the picture. Fans urged the model to tattoo them next while some gave her suggestion for her next.

Paris Jackson also posted videos on her social media story while she was busy getting the tattoo right. She shared videos that were set to the soundtrack of Pedro the Lion's Yellow Bike. Along with the several dots and lines drawn across the toes, the model seemed to be working on creating a unalome symbol on the top of her foot. The unalome symbol represents enlightenment. 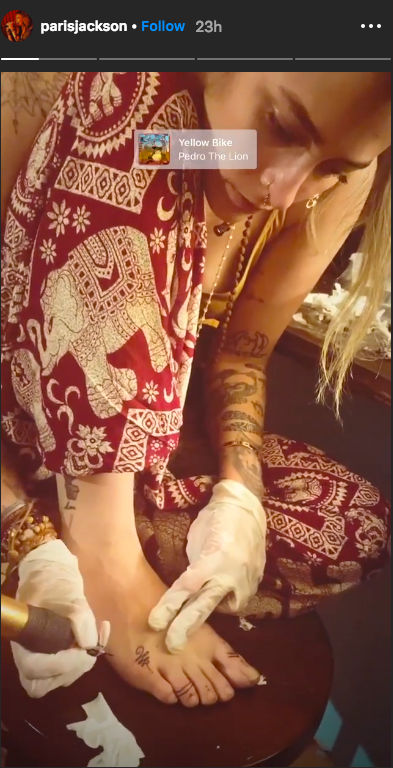 This is definitely not Paris Jackson's first tattoo. Her previous tattoos are clearly visible in the pictures she posts. She has a lot of body art which also include several tributes to her late father, Michael Jackson. Paris has also got a matching tattoo with her godfather and actor Macaulay Culkin.

Some of her tattoos include a sunflower on her arm, a feather behind her ear and a wolf on her forearm. The singer just got inked in March and got a tattoo on her neck. She inked a quote from the popular fantasy series The Lord of the Rings.

Amid quarantine, the model offered advice to people on how to stay positive during the current public health crisis. In an interview with a leading the news portal, Paris Jackson said that she thinks it helps that people live in an age where they can talk to anyone across the globe. She added that it definitely helps everyone stay connected to each other.

She said that even though people are physically isolating, they should not isolate themselves emotionally. Paris Jackson thinks that it is pretty tricky because humans are social creatures by nature which is why they have lived in tribes in communities. The 22-year-old acknowledged that there are a million ways to deal with anxiety and everyone copes differently and encouraged everyone to keep trying.