Pete Davidson Takes A Dig At Chrissy Teigen, 'relieved' To Have Her Out Of Their Lives

Pete Davidson recently appeared on the popular show Saturday Night Live where he took a dig at Chrissy Teigen for her mean DM to Courtney Stodden. 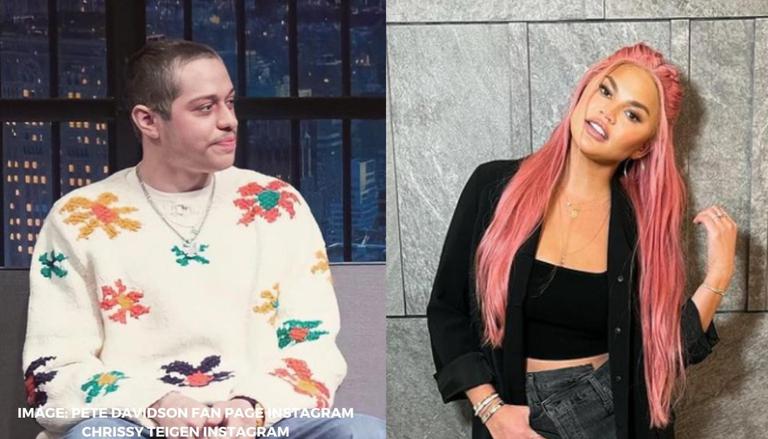 
Pete Davidson, one of the well-known American actors and comedians, recently appeared on the popular television show Saturday Night Live where his short gig created a buzz on the internet. On the show, the artist took a major dig at Chrissy Teigen on his 2011 Twitter banter with Courtney Stodden and mentioned that he was glad that she was out of their lives.

Pete Davidson is one of the vital members of the show Saturday Night Live and as the comedian presented the weekend updates on the show recently, he mentioned the one thing about the pandemic was that Chrissy Teigen getting out of their lives. Through his comment, he indirectly referenced Courtney Stodden and Chrissy Teigen’s Twitter banter that surfaced on the internet when the former shared how she got bullied by Chrissy. During Pete Davidson's latest segment, he also compared his show Saturday Night Live with AIDS and stated that it was still there but no one has gotten excited about it since the 90s.

According to reports by the Daily Beast, Courtney Stodden had shared that Chrissy Teigen sent her messages on how she hated her and even telling her to go kill herself. She had even revealed that she texted her stating how she couldn’t wait for her to die. As her interview surfaced online, Chrissy Teigen had taken to her Twitter handle to share her response to Courtney Stodden’s allegations. She had stated that not many people were lucky enough to be held accountable for all their past mistakes in front of the entire world. She had then mentioned how she was mortified and sad at who she used to be and added that she was insecure and an attention-seeking troll. She had even confessed that she was ashamed and completely embarrassed at her behaviour and had added that it was nothing compared to how she made Courtney feel.

READ | Phoebe Dynevor and Pete Davidson are in a relationship, dating rumours confirmed

Chrissy Teigen had later mentioned that she worked so hard to give her fans joy and be loved and had shared that the feeling of letting them down was nearly unbearable. She had also confessed how these were not her only mistakes and assured them that these will surely not be her last as hard as she tried. Posting an apology publicly on Twitter, Chrissy Teigen had mentioned how tried connecting with Courtney Stodden regarding this issue. She had added that since she publicly fueled all that, she wanted to apologise to her publicly.

READ | Pete Davidson is 'burning off' his tattoos to get more film roles, starts removal process